Does every action movie post 9/11 have to be about terrorists? It would seem so. London Has Fallen sees leaders from all over the Western world visit London for the English prime minister’s funeral. Security is tight, but apparently not quite tight enough. Before you know it, five world leaders are dead and the President of the United States (Aaron Eckhart) is on the run with Secret Service agent Mike Banning (Gerard Butler) in the wake of a series of high scale terrorist attacks. Meanwhile in America, Morgan Freeman reprises his role as God for the four hundredth time in his career (this time it’s as the Vice President). Of course America isn’t going to let the terrorists win. U-S-A! U-S-A! 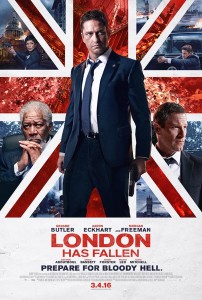 The action is relentless, and the best thing that can be said about Babak Najafi’s first English-language film is that it is never dull. There are explosions galore and violence aplenty, and Gerard Butler drops the F-bomb every few minutes to remind us of how hardcore he is. The President says in all seriousness that he will NOT be executed for propaganda, which is probably the most unintentionally hilarious thing in the entire film. The film is definitely entertaining, but the presumed mentality of its target audience is concerning. The theme song from Team America: World Police comes to mind.

The plot has plenty of holes, but if you can look past them the general premise is… adequate. Until you realise – like this reviewer did after viewing – that this is a sequel to Olympus Has Fallen, and that judging by the trailer they have just have made the same film twice. Hollywood’s low opinion of audiences’ intellect is worrying. (But not completely off the mark, sadly.) Scriptwriters Creighton Rothenberger and Katrin Benedikit will be laughing all the way to the bank with this recycled effort, but audiences probably won’t be laughing much at Butler’s cringeworthy one-liners. Then again… maybe they will.

I’ll regretfully admit that I rooted for Gerard Butler in his brutal killing of each and every terrorist that crossed his path. Until I realised with shame just how much films like these manipulate their viewers with their patriotic brainwashing… and I’m not even American. No doubt this film will have its fans. Much like how Donald Trump has his.

London Has Fallen is in cinemas from 17th March through Roadshow Films.

Written By
Claire Robson
More from Claire Robson
Any woman who has ever experienced a troubled relationship with her best...
Read More