Who would have thought that the year’s most political film would be a Disney film headlined by talking animals?

That’s right, Disney have done it again with Zootopia, creating a film that appeals to kids with fluffy critters and dazzling animation, while speaking to parents about serious social issues. Yet this time around, you feel as though directors Byron Howard, Rich Moore and Jared Bush are genuinely pitching towards an older demographic, or perhaps treating its childish audience with greater respect. Could it be that Disney is trying to educate the next generation of Western children? Or perhaps, with a presidential election coming up, Disney wants adult Americans to take a good, hard look at their xenophobia?

Zootopia’s symbolism might not be as specific as Animal Farm, but the film’s social messages are explicit in the film’s synopsis: a female rabbit, Judy Hopps (voiced by Ginnifer Goodwin), defies social customs to become Zootopia’s first bunny police officer. She joins forces with a sly fox, Nick Wilde (Jason Bateman), otherwise shunned by society for being a ‘predator’, as they solve the case of the missing otter.

It doesn’t take much effort to realise that Judy’s aspirations and hardships are symbolic of the feminist movement and that backwards attitudes towards Nick (among other predators) are emblematic of societal prejudice – towards race, class, religion, culture, or all of the above. In the meantime, the film finds time to make pointed commentary on a plethora of other social issues, not limited to sexual harassment, positive body image, mental health, government corruption, the underworld, media hyperbole, and – dare I say it – eugenics. Without a doubt, bloggers the world over will latch onto Zootopia’s clever metaphors over the coming months. 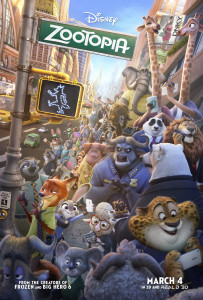 Given how much is crammed into this film, it almost feels as though the whodunit narrative, and our missing otter, is nothing more than a McGuffin. However, Judy and Nick’s quest – which consumes the middle section of the film – is what will keep the kids interested and laughing. It’s during this stanza that the filmmakers’ imaginations are allowed to run wild, as we meet a free-spirited yak, a Godfather-esque rodent, and an office full of public service sloths. Each skit is memorable and quotable, providing a welcome distraction from the serious themes that bookend the film.

Does Zootopia try to do or say too much? It probably depends on who you’re asking. For a twenty-something uni graduate, the film is easy to follow and gives just enough respect to each issue it raises. For a six-year old watching Disney for the first time, it’s likely that many plot elements will fly straight over their heads. With that said, the film’s key takeaway message – that stereotypes do more harm than good – is demonstrated in both macro and micro ways; kids should be able to realise this regardless of what they miss.

On a superficial level, Zootopia ticks all the right boxes. The New York inspired metropolis is cartoonish yet elaborate, and takes full advantage of the diversity of its citizens; mice reside in a miniature town, while giraffes enjoyed tailored technological solutions. Great detail is put into every centimetre of the frame, right down to the parody brand names that exist in this alternative universe. It’s the kind of film that deserves a second watching, if only to spot the hundreds of easter eggs littered throughout the Zootopian landscape. Furthermore, the pop culture and Disney references that sneak into the snappy dialogue are a rewarding treat.

There’s a lot to love about Zootopia, from both a cinematic and a political level. Regardless of what aspect resonates most with you, Zootopia is Disney’s most sophisticated and clever animated release in years.

Zootopia is in cinemas from 17th March through Disney.

Written By
Kevin Hawkins
More from Kevin Hawkins
Good songs sometimes take a while to get going, and the same...
Read More