J.J. Abrams. So hot right now. What can’t the man do? He made Star Wars good again, made us root for Tom Cruise in the Mission Impossible sequels, and most notably, had us obsess over a hatch and a bunch of random numbers in Lost. Having produced Cloverfield in 2008, he now produces its ‘blood relative’ in 10 Cloverfield Lane. They don’t have a lot in common. But his latest feat is far superior.

Abrams oversees a team of relative newbies, with Dan Trachtenberg making his feature debut as director, and Josh Campbell, Matthew Stuecken, and Damien Chazelle teaming up to write the screenplay. There’s only a few prior credits among them, although it’s worth noting that Chazelle is the genius responsible for Whiplash, one of the best films in recent memory. There’s more than a hint of the Abrams touch however, with certain aspects of the film reminiscent of Lost in particular. 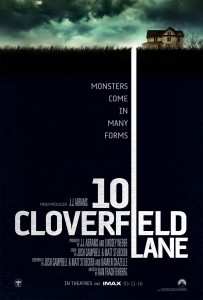 Like many good movies do – Ex Machina is one recent example that comes to mind – this film doesn’t mess around with a lengthy set-up. Five minutes in and it’s go time. Michelle (Mary Elizabeth Winstead) wakes up in an underground shelter where a man named Howard (John Goodman) tells her he’s saved her life. The world is under chemical attack – he’s sketchy on the details – and she can’t leave. Is he telling the truth or is he some kind of sicko? The real question is, can we trust John Goodman?

It’s an extremely smart casting choice because it could go either way. He seems an unlikely choice for a bad guy, but maybe that’s what they want us to think! The scale keeps tipping from side to side. Whatever the case, we’re all rooting for Mary Elizabeth Winstead, and she holds her own against the big veteran. Completing the main trio is Broadway actor John Gallagher Jr. as Emmett, another addition to the unusual household. Although he doesn’t make much of an initial impression, he leaves his mark.

This is an exceptionally well-paced film, which is consistently exciting while still giving its audience some time to breathe. The score by Bear McGreary (The Walking Dead, Agents of S.H.I.E.L.D.) perfectly complements the tension, and the soundtrack is especially enjoyable. Weird bunkers haven’t been this fun since… well, Lost.

10 Cloverfield Lane has used the rare but well-appreciated tactic of secrecy in its release. It was announced only two months ago, having been completed with barely anyone knowing. Here’s hoping viewers go to the film with some mystery still hanging in the air, as it should be. Avoid synopses, tell your friends to shut up, and see it for yourselves.

10 Cloverfield Lane is in cinemas from 10th March through Paramount Pictures.