Offensive, low brow and crude. These are among many of the reasons to see Sacha Baron Cohen’s latest feature Grimsby. With a working class Northern twang, tight footy jersey, Liam Gallagher haircut and a body littered with crap tattoos, Cohen has found a new way to offend and delight as Nobby Butcher of the real town Grimsby.

Without giving away too many of the jokes, one comes to realise why  Cohen’s latest feature hasn’t been marketed as much as his previous movies. Why bother? Undoubtedly several key moments will be talked about at water coolers and will polarise social media. As a teaser I will say the real Daniel Radcliffe and Donald Trump both have nothing to do with this movie and this film has perhaps the biggest dick joke as yet put to screen.

Compared to Cohen’s last four character films, Grimsby differs in cinematic structure. This is his first fully constructed narrative film, as opposed to previous films which have divided screen time between constructed material and his infamous one take improvised character work. This brings an important distinction in the humour. No longer is his audience allowed to fully externalise their laughter. Many times in his previous films the laughter is not directed at terrible stereotypes but rather at how people react to them. With a fully crafted film the laughter and humour comes from within oneself and this will no doubt be his most subjective film.  The same elements of shock and outrageousness are still here and previous fans will enjoy this effort. 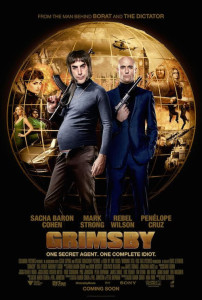 As to the film itself, Nobby lives in a tiny apartment with his many kids, among whom he  counts Luke, short for Leukemia, and newborn, Django Unchained. Happily married to Lindsey (Rebel Wilson), Nobby is tipped off that his lost brother Sebastian (Mark Strong) is in town. Sebastian is a super spy working for an offshoot of MI6. Obstructing his mission to prevent an assassination leads to Sebastian ostensibly classed a traitor. Only by working with his brother can he hope to clear his name. The plot is admittedly weak for an action film that doesn’t lampoon the spy genre per se. Also filling out the cast is Penelope Cruz, a shady World Health Organisation luminary, and Cohen’s real life wife, Australia’s own Isla Fisher as Sebastian’s love interest and co-worker.

A lot has been written about this film already and for good reason. In particular the question has been asked, is it right to aim down in comedy? Cohen’s answer seems to be yes. If it’s funny. This is a film that takes aim at AIDS victims, pedophiles, Bill Cosby, Donald Trump, but mostly football hooligans, comparable to the Aussie bogan with crap tats, thongs and a continually unfinished beer glued to hand. Cohen hijacks the cabin of your brain to put your morality on autopilot as he breaks taboos and increasingly less conservative barriers to bring out shock laughs. This is great politically incorrect fun set to a smooth Brit Pop medley.

Grimsby is in cinemas from 10th March through Roadshow Films.