It’s been said that if you come out of a film thinking about the cinematography, it probably wasn’t a very good film overall. Victoria ran the risk of relying too much on this factor; the film’s cinematographer, Sturla Brandth Grøvlen, even earns first credit above director Sebastian Schipper in the end titles. The film is shot in one single continuous take (not Birdman-style, but actually) and has a run time of 134 minutes. Some may call it a gimmick, and alone it wouldn’t be enough to make a great film. However, it is the combination of the strength of the performances, a compelling story, and a unique way of shooting that make Victoria an extraordinary feat of filmmaking that should be seen by all lovers of cinema.

The titular Victoria (Laia Costa) is a young Spanish woman who is living temporarily in Berlin without much knowledge of the German language. As she leaves a club in the early hours of the morning, she meets four young locals, Sonne (Frederick Lau), Boxer (Franz Rogowski), Blinker (Burak Yigit) and Fuß (Max Mauff). They’ve all had quite a few drinks and easily entertain the friendless Victoria with their drunken banter. Due to the language barrier they speak in broken English, and Sonne convinces Victoria to join them on a nearby rooftop where they drink stolen beers. It starts off innocently enough, until Victoria is roped into something sinister. Do yourself a favour and don’t watch the trailer beforehand. 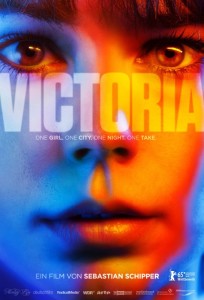 The camera stays with Victoria for every moment – the audience is her, but with a little extra insight into her companions thanks to the subtitles (she is left out in the cold when they speak German). Anyone who has ever been alone in a foreign country is likely to identify with Victoria; excited, eager to make friends, and often confused, she has come to Germany during a limbo period in her life. On the surface Victoria may seem to be a cautionary tale about hanging out with randoms when you’re vulnerable. However, it’s unlikely to turn off too many would-be travellers who may very well consider Victoria’s choices to be overly foolish. In this sense it’s not so much a “this could happen to anyone” story, though you could argue it is a case of “wrong place, wrong time” for a character prone to bad decision making. Some may find fault in Victoria’s willingness to go along with what appears to be an obviously bad idea, but given her character’s background, her choices are plausible.

Director/writer Sebastian Schipper’s original script was only twelve pages long, with much of the dialogue in the final film improvised. As a result, Victoria’s interactions with the men feel very authentic, and though this reviewer initially predicted unexpected jump scares, it’s not that type of film, and is all the better for it. Instead, Victoria is a slow burn that eventually reaches intense heights. The first half of the film is mostly light banter which may turn off some viewers, however this involves necessary character development that informs later choices in a high stakes scenario. The performances of the main actors cannot be faulted, with Laia Costa nothing short of outstanding as Victoria, and Frederick Lau simply beautiful as Sonne.

That Victoria was really shot in a single take over multiple locations in Berlin is hard to believe, and yet you better believe it. It took the crew three attempts, with the third their last chance given financial constraints. Filmed from 4:30-6:54am on the streets of Berlin, this method was surely a terrifying prospect, with so many opportunities for something to go wrong. There are a few minor mistakes – such as Sonne dropping a cigarette on the ground – but they don’t matter and are part and parcel of this way of filming. Though there is an editor listed on the imdb page, Schipper reported this was only because they needed an editor for their back-up plan of splicing together rehearsal takes for a jumpcut version should the initial plan fall through. He has said this cut was awful (through no fault of the editor) and that everything hinged on a good final take.

There is one scene where the men yell at Victoria as she drives in the wrong direction – Schipper reported in an interview that their yelling is genuine because Laia Costa actually did drive the wrong way and put the whole film at risk. Anecdotes such as this make this film all the more remarkable. Schipper’s role as director is comparable to that of a director of a play – only able to do so much once the ball starts rolling. And yet to compare this to a play is to downplay its accomplishments – the one take involved 22 locations, 150 extras, six assistant directors, three sound crews, seven actors, one anxious director, and one hard-working cinematographer. To call this a remarkable feat of filmmaking is an understatement. Don’t miss this exquisite and exhilarating piece of European cinema.