With what would have to be one of the most astonishing debut films of all time – and horrific in a way that is without parallel – Hungarian László Nemes has burst onto the film making scene with Son of Saul.

Set over 48 hours in an Auschwitz crematorium, this is the story of Saul Ausländer (Géza Röhrig), a Hungarian member of the Sonderkommando – camp inmates isolated from the rest of the prisoners and forced to help the Nazis carry out their abominations. At the beginning we see him assisting a group of Jewish prisoners into a gas chamber. After hearing the screams and the frantic banging on the doors the room goes quiet. He is part of a team forced to go in to collect the bodies and take them to the ovens where they are to be reduced to ash. But this time is different from all the other countless groups that have been fed into the Nazi war machine. When Saul and his team head into the chamber, one boy is still alive but barely, and after dying a short time later he is sent to the prison doctor for an autopsy. This was one boy in a scheme that oversaw the deaths of millions. Saul identifies this boy as his son.

Some films have the power to produce an emotional reaction but Son of Saul goes one step further. After 107 minutes of the most wrenching, stomach churning revulsions, the viewer is left with a sense of numbness. The shock and the awe that Nemes creates with this wholly unique and brilliant film is the kind of experience that reinforces the true power of cinema; it is disturbing in a way that rarely happens. Like a splinter that works its way into the mind, this will stay with you long after leaving the cinema. 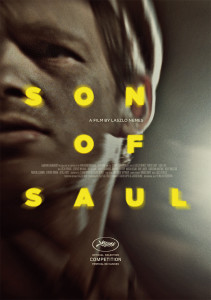 It’s the unique visuals which truly make this film so memorable. Nemes chose to shoot in 35mm film and use the very old 4:3 aspect ratio, meaning that most of the film looks like a square image. The opening shot, which lasts well over five minutes, begins with Saul walking into close up and he barely ever leaves. Cinematographer Mátyás Erdély uses a very shallow depth of field; only the very close is fixated on, with everything at the side of the frame being hazy and out of focus. Many long tracking shots are used to seamlessly link everything together and although it isn’t one continuous shot, the film certainly feel like a Birdman-esque one take wonder. What this all amounts to is a film that is almost exclusively told with the main character’s face being shown in close up. Every single nuance to Géza Röhrig’s incredibly restrained performance is captured (it is amazing to learn that like Nemes this is also his first film). It all creates the sense that we are living through the life of this one man; everyone else around him is simply connected to his journey without being the focus of it. In terms of visual story telling: that’s brilliant. It creates the sense of just how significant this one story is to the person concerned. It’s easy to forget that there are six million stories just like this which were each just as vivid.

It seems that a new film about the Holocaust comes out every year or two. Some of them are profound, some of them are exploitative, and some are that rare cinematic feature: important. This is an important film that deals with a serious subject – perhaps the most serious subject there is. Son of Saul has entered the upper echelon of films about the Holocaust; it deserves to be held in the same regard as Schindler’s List, The Pianist or Der Untergang. Claude Lanzmann has even come out with high praises of this film. Lanzmann directed the 1985 documentary Shoah which is considered to be the definitive account of the Holocaust and famously has a running time of nine hours and twenty three minutes.

Anyone who has studied this egregious period in history knows that no one who wasn’t there could ever hope to comprehend what the Final Solution was like. How could anyone ever understand something like this? The scale of such a crime is beyond human intellect. But it is films like this that force the brutal truth back into our minds: what the Nazis did was not something that happened in the distant past. This happened 70 years ago. Many of our grandparents were alive when it was going on and it occurred in the heartland of this supposedly civilized world. Son of Saul deserves to be seen not only because it is a truly astonishing piece of film making which brings to life like never before the most egregious chapter in human history, but because the Holocaust is not a subject to be shied away from. It was the German born philosopher Karl Jaspers, himself persecuted by the Nazis, who summed it up perfectly with the following:
“That which has happened is a warning. To forget it is guilt. It must be continually remembered. It was possible for this to happen and it remains possible for it to happen again at any minute. Only in knowledge can it be prevented.”

Son of Saul is in cinemas from 25th February through Sony Pictures.