Following in the muddy footsteps of Abraham Lincoln Vampire Hunter is the equally damp Pride and Prejudice and Zombies from director and script writer Burr Steers. A quick Wikipedia search reveals the same culprit – a Mr Seth Grahame-Smith is the author of both works. A story of loose ends and tight morals, the take away message seems to be that a funny title does not maketh a humorous film.

While it would be much more fun to ruminate on different genre bending classic literature titles, duty dictates I talk about this film instead. Just quickly though, how about: The Assassination of Harold Holt by the Coward Moby Dick. The Portrait of Dorian Gray and Eddie Murphy – Immortal Ghost Detectives. Or maybe The War and Peace of Lycanthropes (though I much prefer Elaine Benes’ alternate title ‘War. What is it good for?’).

Returning to the film though, we see the same classic characters resurrected into cinematic life. Playing Elizabeth Bennet is the beautiful Lily James. Mr Darcy is brought to life by dark and handsome Sam Riley. Elizabeth’s fair sister is portrayed by gorgeous Bella Heathcoat, and breathing new life into Mr Bingley is the quite dashing Douglas Booth. I’m not one for conspiracy theories but surely behind closed doors producers are deciding mean cast attractiveness is compensating for watery scripts. Not to take anything away from the cast’s performance – this quartet all deliver quite well, in particular Sam Riley. But this is part of the problem. These Americans have been directed to enact slick aristocratic sincere performances with a script that is begging for British dryness. Exceptions are Sally Phillips and Matt Smith who both manage to ring some comedic timing out of the dead pan atmosphere. 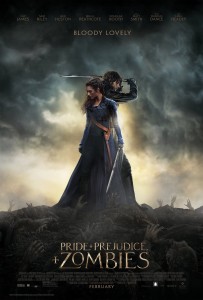 While it seems obvious that a film like this is never going to take itself too seriously, and yes it might be unfair to attack it, this really is a film that could have been cut down by 90 minutes into a 15 minute Will Ferrell production. The schtick gets tiresome very quickly and Burr Steers inserts the zombies into the film with all the finesse of a chainsaw trimming a bonsai tree. There are so many loose ends and so much unresolved tension that a film which markets itself as action, horror and romance, but not comedy, deserves to be taken to task. Firstly there is a binary of Japanese and Chinese culture and martial arts which comes off as contrived and weird.  And what starts off as interesting symbology to the four horsemen of the apocalypse also goes nowhere despite multiple references. The tantalising possibility of cognitive, human sympathising zombies also goes completely nowhere, but most frustrating of all is the underlying tension and implied infections of several key characters that ends up being completely forgotten! The cherry on top of all this is the overly sexualised Bennet daughters who, despite their oriental training, fight more like Zack Snyder’s choreographed Spartans.

Rant over, this film really isn’t all doom and gloom. The flesh, romance and the nostalgia of this classic tale all bring enough to the movie to engage most attention spans. The horror comedy genre is a budding one, and films like Tucker and Dale vs Evil and the quite excellent New Zealand production Housebound prove that the contrast and blend of both genres can work magnificently well. It is a shame that many viewers’ introduction to this cinematic blend will be Pride and Prejudice and Zombies. It is a film that fits into many genres yet lacks all their respective prestige.

Pride and Prejudice and Zombies is in cinemas from 18th February through Roadshow Films.

Written By
Ben Isbel
More from Ben Isbel
Blue is a series of provocative vignettes on the state of our...
Read More