Part action-thriller, part environmentalist critique, part political commentary: Snowpiercer is a rarity. It offers both exhilarating entertainment and intriguing ideas – and is all the more remarkable for it. The film tells of a future where an attempt to stop climate change has instead resulted in the world freezing over, and the few remaining survivors are confined to a constantly moving train. The carriages designate different classes, and a revolt from the lower classes propels the narrative forward as they work their way toward the front to gain control. With a screenplay that director Bong Joon-Ho (probably best known for The Host) wrote with Kelly Masterson, based on the French graphic novel Le Transperceneige by Jacques Lob and Jean-Marc Rochette, the film is marked by its deft hybridity, admirable ambition and meticulous vision – qualities sorely lacking in contemporary cinema.

Curtis (Chris Evans) has been living in the cramped and dirty tail-section of the train for seventeen years. Other members include Edgar (Jamie Bell), his right-hand man, and Tanya (Octavia Spencer), a mother with a young son. But, under the guidance of spiritual leader Gilliam (John Hurt), Curtis has been hatching a plan to take control of the train from the mysterious Wilford, who built and runs the train. They enrol Namgoong Minsu (Song Kang-ho), who helped design the train’s security, and stage a revolt to disrupt the social order. However, they come up against Deputy-Minister Mason (Tilda Swinton) and a whole swathe of others intent on blocking their path as they make their way, one carriage at a time, towards the front. In effect, the train serves as a much smaller, physically compartmentalized analogue for society, reproducing its unresolved and entrenched conflicts in both similar and new ways. 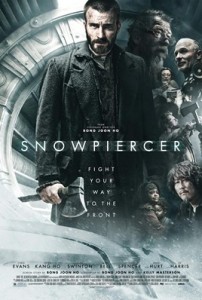 The film is firstly astonishing for its sheer blend of tones, achieved in large part to the fantastic set design by Czech production designer Ondrej Nekvasil. There is an admirable attention to detail with each new carriage – school classrooms, greenhouses, aquariums – and each has its own distinct style and atmosphere, creating memorable individual set pieces. The screenplay complements this, as the stories and explanations that are woven throughout provide insights into how the train changed over time. Additionally, as the film moves from carriage to carriage, there is an unpredictability as to what will come next that sustains a highwire tension. The cramped space only makes the bloody violence all the more engaging for being contained, and the cinematography is kinetic and varied in style and pacing.

The consciously diverse cast all put in solid work, but Evans and Swinton deserve particular mention. Evans infuses his performance with a surprising earnestness and sensitivity, and his Curtis understands that difficult decisions and sacrifices will need to be made. On the other hand, Swinton brings a welcome off-kilter hilarity to the film. Donning thick-rimmed glasses and a haughty, entitled lilt, her Minister Mason is a political parrot, a mouthpiece willing to submit uncritically to toe the line whilst fully accepting that such positions may not always be tenable. The juxtaposition between Curtis and Minister Mason, and the later appearance of the enigmatic Wilford, fleshes out the film’s social and political themes around class tension, the formation of ideology, the distribution of power and the exercise of control and access to resources.

Snowpiercer is stimulating and rewarding on several fronts, and testament to how an uncompromising vision can transcend genre and formula to create something refreshing and unique.

Written By
Dan Santos
More from Dan Santos
In a world characterized by rapid globalization there is also an increasing...
Read More