When the human skull is hit with an impact of 60 g-force the brain usually receives a concussion. This means that blood vessels have been damaged, the tissue is bruised and the nerve endings in the grey matter have been injured. A concussion is essentially a mild brain injury; it’s not life threatening but it does fairly serious damage in the long term if the body isn’t given enough time to heal itself. That’s at a force of 60g. In a professional game of American football a head-to-head collision will usually result in a clash of 100g or more and it might happen several times throughout a game in a sport that is played once a week.

As is illustrated at one point in a fairly good piece of visual exposition, think of the human head like a glass jar filled with water and then place an onion in it. Move the jar back and forth and the onion is protected from the side by the cushioning of the water but give the jar a violent shake and the onion is going to mash against the glass and get a pretty significant bruise. Same with the head: even if you’re wearing a helmet, the brain is still bouncing off the skull and doing damage when it gets hit.

This was a problem that the NFL knew about and yet couldn’t do anything substantial to fix. In 2002 a string of cases started that revealed just how pressing this problem was. Ex-NFL players were experiencing screaming headaches, memory loss and serious mental health problems. The case used as the catalyst for the story of Concussion is that of Mike Webster (David Morse), a retired centre for the Pittsburgh Steelers who was found dead on the outskirts of the city living in a car and with his remaining sanity slipping away. His autopsy was performed by forensic pathologist Dr. Bennet Omalu (Will Smith) who realised that something was amis. How could a man still in middle age who was a professional sportsman for his adult career have a brain in such terrible state? After researching the problem further he determined that Webster had died of an unknown condition which he called ‘Chronic Traumatic Encephalopathy’ (CTE), or in simple terms: repeated blows to his head had effectively destroyed his brain’s ability to heal itself. This was a staggering find which if true meant that the NFL had a very big problem to deal with but in a move of wilful blindness the league chose to ignore the findings and even went as far as trying to destroy Omalu’s career. 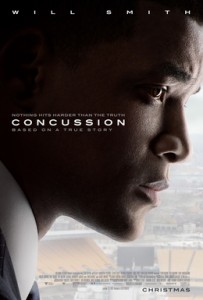 Produced by Ridley Scott and directed/written by Peter Landesman in his second feature after the decent Parkland back in 2013, Concussion is a film with good intentions. Unfortunately it isn’t a good film. Despite some good performances and a true story that was worth telling, this is a stock standard middle-of-the-road biopic that isn’t worth a trip to the cinema.

Will Smith’s leading performance is the highlight. Omalu has charisma and can be both caring yet direct when he needs to be, but the quality of the acting is wasted. Firstly Omalu’s accent seems to be one that Smith can’t pin down. What is supposed to be Nigerian ends up being a mix of the entire sub-continent of Africa which occasionally slips into Jamaican. Secondly, some of the scenes that Smith is forced to play simply don’t work. For example, when setting up to perform an autopsy Omalu begins chatting to the corpses like they’re alive and politely asks them to help him find what killed them. What’s meant to indicate our main man’s compassion and dedication to his works ends up being laughably ridiculous and at the same time a little bit creepy.

It also has this strange dichotomy where the film wants to champion both religion and science at the same time. Omalu is a devout Christian which plays into certain parts of the narrative. In the film’s most cringe-inducing scene it’s implied that Omalu has been chosen by God to make people aware of CTE, but the next scene makes a big point about how science needs to be respected and that facts and evidence can trump any cynic who denies what science is clearly pointing to. While it’s not the case that religion and science are mutually exclusive, in this context it smacks of a film trying to have its cake and eat it too.

Perhaps this film works a lot better when played for an American audience. Football is very big business over in the States and the passion that fans seem to have for it is rabid. One character actually points out that the NFL have essentially gained control over a day of the week, the same one that used to be owned by the church. For Australian audiences, while the story is interesting all the football jargon tends to go over your head and occasionally there are rather strange discussions and grand statements about what it means to be an American in that self-important way that American films can occasionally be.

However, it certainly makes you think what the bodies of AFL players must be going through considering they play without any padding or protection. Then again maybe it’s the helmets and armour that are unwittingly encouraging the kind of hits that cause head injuries; if you’re wearing padding you can go for broke and tackle with reckless adandon knowing that the other person is protected against injury. Catch 22.

While it has the ambition to be, if you’ll forgive the pun, a ‘hard-hitting’ drama, Concussion isn’t nearly as significant or intelligent as it tries to be. The best summary would be that it’s the film equivalent of a high-fibre meal. Important and worth consuming because it serves a good purpose, but when all is said and done it doesn’t taste that good.

Concussion is in cinemas from 18th February through Roadshow Films.

Written By
Simon Storey
More from Simon Storey
November 8th 2016 is a date destined to be a life long...
Read More