There’s a saying that gets thrown around when discussing world poverty that goes “the future is here, it’s just not well distributed”. We are living through the strange period where the disparity of wealth is more skewed than ever before in world history, in which the small collective of people commonly known as ‘the 1%’ now hold more wealth than half the global population (in plain terms: 85 people now have more money than 3.5 billion*). Despite being a problem that hides in plain sight it certainly doesn’t seem to be getting better any time soon, even with the valiant effort by many charities. Poverty, Inc. by documentary maker Michael Matheson Miller looks at the current set-up of the poverty industry which, despite having the best intentions, may be doing more harm than good.

Fighting global poverty is a massive effort that has spawned an equally massive business model, but as is asked by the film’s tagline; who exactly is profiting the most? There seems to be a new charity spring up every few months that thinks it’s going to fix the world but in a cruel irony many of the organisations that send aid to the developing world aren’t making the problem any better. Although done with the best intentions, sending massive hauls of aid might be the least effective way of helping the developing world. It also doesn’t help that a system that tries so desperately to alleviate the poor makes a very tidy profit itself, mostly tax free.

The term ‘Third World’ seems to have fallen out of vogue in the last few years, partly because it’s a phrase that comes from the Cold War and partly because seeing the world purely through the guise of First/Second/Third World reinforces the kind of divisive concepts that aren’t helping anyone. The slightly condescending term ‘developing world’ is used instead, with all the grace and subtlety of a parent patting a child on the head while gently cooing “Don’t worry, keep trying and you’ll get there eventually”. 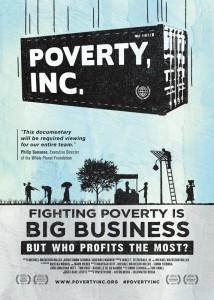 Poverty, Inc. thankfully avoids the route that a documentary like this may have gone down if put in other hands. Its aspiration is to inform the viewer about the current effectiveness of aid giving charities, not to guilt the viewer towards its point of view by being preachy or self-important. Miller interviewed over two hundred people in twenty different countries for research. Those who provide the talking-head interview are diverse and genuinely seem to know what they’re talking about (one of them also has a voice identical to Edward Norton’s). Quite a few case studies are used as focal points and the conclusion comes across clearly and succinctly.

Take this example; an egg farmer from Rwanda was just starting to get his business up and running when a well-meaning church run organisation decided to send huge quantities of free eggs to help feed the hungry in the Rwandan countryside. Overnight this farmer’s business was destroyed; after all who would buy eggs from a local farmer when there are massive amounts of free ones being given out? A short time later the charity’s attention was turned elsewhere leaving behind a situation where the kind of local entrepreneurship that will end the poverty cycle was crippled and now the population subconsciously believes that if they wait long enough they will be given goods for free, which then creates its own vicious cycle.

Poverty, Inc. is the perfect example of what Peter Singer means when he talks about ‘effective altruism’. It’s all very well to say you’re going to give money to charity and think this will save the world, but the system is next to useless if the money goes towards an ineffective charity. People genuinely want to make the world a better place but the point Miller clearly explains is that for this to happen the current system of charity needs to change the way it conducts itself. As it is beautifully phrased by one interviewee, “Having a heart for the poor is easy. Having a mind for the poor, that’s the challenge”.

Instead of getting on Tumblr and complaining or sharing posts on Facebook (in the kind of wishful ignorance Eli Roth was making fun of in The Green Inferno), why not try and track down documentaries like Poverty, Inc. The problem will only get better if people are better informed about what they’re talking about and Miller has raised exactly the kind of food for thought that this topic needs to be framed around.

Poverty, Inc. screens as part of the Transitions Film Festival at Cinema Nova from 18th February to 3rd March.

Written By
Simon Storey
More from Simon Storey
Nicole Kidman has fallen into a bit of a rut of late....
Read More