Thousands of words can be exhausted on what’s wrong with superhero movies right now, but let’s just throw out a few. Too many characters jammed in, giving each minimal screen time and development. CGI-heavy actions scenes that feel like they have no weight to them. Too much meddling from producers. Constant setups for ‘shared universe’ stories to the detriment of any kind of narrative sensibility. Overly dramatic self-seriousness about the power and responsibility of a hero. Every film looking, sounding, and feeling the same. So it was about time that a movie in this genre came along with some real personality.* A film that makes fun of what has essentially become an assembly line of critic-proof money-making machines, regardless of the actual quality of the movie. It’s taken over ten years, but now audiences might just get that film. Deadpool is pretty close to the perfect version of that movie.

Development for Deadpool began in 2004, but it was put in turnaround a year later. After being shopped out to writers by a new studio in late 2009, a director was selected in 2011. Then there was nothing for three years until test footage was leaked online. Why did it take so long for it to get made? Simply, studios are scared of anything different in this genre. Better an Iron Man 2 than Ang Lee’s Hulk. Easier to get rid of a strong-willed director like Edgar Wright than not follow the ‘Marvel plan’. Safer to let Zack Snyder just mindlessly destroy whole cities than risk something like audiences being confused with Bryan Singer’s Superman Returns. A graphically violent movie about a horribly scarred, mentally unstable, smart-mouthed anti hero doesn’t jump out as a banker. It’s risky, offbeat, something that would require some love, and was no doubt scary for studios. Uniquely though, this movie still got made thanks to the fans – making this one of the few times that ‘fan service’ has been beneficial. The leaked footage sent the internet crazy, and it looks like 20th Century Fox (who co-produce with Marvel) decided to throw a bit of money at the team still clinging on to Deadpool, figuring ‘what the hell – do what you want’. 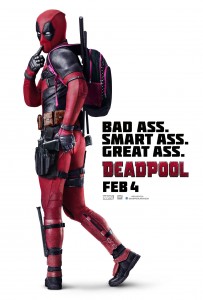 Crucially, Ryan Reynolds maintained his interest in the lead role of Wade Wilson over all those years, because without him there would be no movie. It’s virtually impossible to think of any other actor out there who could so completely embody what Deadpool is meant to be. Reynolds is no slouch of an actor (see ‘Mississippi Grind’ for an excellent recent illustration), but his range is often overshadowed by his obvious comedic ability. Here, as the ex-mercenary who’s disfigured after undergoing an experiment in the hope of curing his cancer, Reynolds does away with his good looks to let us focus on the rest of his skills. Like the film itself, there’s love, pain, sadness, anger and lunacy in his performance, but he retains his sense of humour throughout. Much of this performance is through his voice, movement, and his eyes, which are expressive even under the mask. You might say that this even acts as a commentary on much of the casting in other superhero movies, where actors are picked for the fact that they look the part, rather than being able to act it.

This is a gloriously funny, violent, and rude adult ‘superhero’ movie (where the hero isn’t actually a hero) right from the brilliant opening credits. Limbs are severed, there’s splatter and bits of brain everywhere, and no shortage of ‘fucks’ are uttered (whereas in vanilla-like Age of Ultron, thousands of kicks and punches are thrown, many people die, and barely a single drop of blood is memorably spilled or anything stronger than ‘shit’ is cursed). It’s a self-indulgently (in a good way) meta-movie, packed with in-jokes, pop culture references, and self-parodying wisecracks. It takes swipes at the studio, the genre, its fellow X-Men movies and their casts, and even the audience itself (stay for the post-credits scene). Deadpool isn’t just breaking the fourth wall in this movie; there is no wall to begin with. This, of course, is like Christmas for the fans, who in this screening could be heard whooping, hollering and clapping throughout. But this is still simply a funny, well executed movie, and the rest of the audience enjoyed themselves just as much (even my partner – who has either rejected the chance to watch, or slept through, 95% of other superhero offerings – was impressed). Much credit must surely go to director Tim Miller on his first feature film, and writers Paul Wernick and Rhett Reese (Zombieland) for their razor-sharp script.

The film has some problems though of course, with the main flaw being its final showdown scene. This features a fight atop some giant crumbling structure, which is pretty much the same as every superhero movie ending of the past few years. This stands in contrast to the rest of the action scenes, which are tighter, more unique, and therefore more exciting. What makes Deadpool though is the constant humour and personality throughout. For other superhero movies, flashes of character are what many critics and audiences clung to throughout the cookie-cutter action scenes and dull-dialogue. With Deadpool, and maybe the upcoming Suicide Squad, audiences might show studios that they’ve got the taste for a very different flavour of hero.

* Maybe Guardians of the Galaxy, but that wasn’t exactly a superhero movie per se.

Deadpool is in cinemas from 11th February through 20th Century Fox.

Written By
David Nagle
More from David Nagle
In Hollywood blockbuster terms, we’re now living in an age of the...
Read More