In many ways, 2015 has been an immense year of anticipation for the film industry. There was a return to Jurassic World, and chases through Mad Max’s apocalyptic backyard. There was the traditional lead-up buzz to yet another Bond, and right now cinemas are mopping up the drool from the aisles as the movie-going community shamelessly salivates over Star Wars’ first forward step in three decades.

The highly anticipated reappearance of Charlie Kaufman, albeit on an altogether smaller scale, presents another example. He returns after a leave of absence spanning back to 2008 when the polarising Synecdoche New York baffled and fascinated pundits. This is his Kickstarter-funded Anomalisa: a stop-motion animated journey to the Hotel Fregoli in Cincinatti, and a darker than usual (for Kaufman) exploration of modern-day relationships and communications.

Michael Stone (voiced by David Thewlis) is a successful customer relations guru, but he is also a man in the midst of an existential crisis. He arrives at his hotel away in Cincinnati to deliver a speech to a gaggle of fans, but in the meantime finds himself lamenting the mundanity of his life and his alienation from the very people he should be closest to. Feeding into his dissatisfaction is the fact that everyone – the taxi driver, the concierge, even his wife and son – speaks to him with the same voice. It is only when he chances upon Lisa (voiced by Jennifer Jason Leigh) that he sees a ray of hope that he can escape. Though, from what exactly, he’s not sure.

Some may presume this kind of animation to be a gimmick to make up for what, on face value, appears quite an uneventful plot. However, the use of dolls here in place of actors plays a central part in our reactions to what is a poignant, occasionally amusing, but memorably unsettling short story. 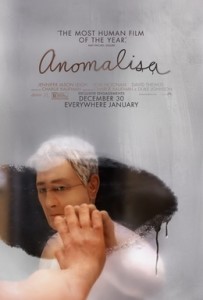 Bringing back memories of the puppetry themes spawned in Being John Malkovich, you could even say that Anomalisa attempts (and largely succeeds) to fulfil the dramatic potential of puppetry that (fictional) John Malkovich foresaw back in 1999. The approach closes off some narrative possibilities, but it also opens others.

With a startling design effort courtesy of Starburns Industries, which is co-founded by Anomalisa’s co-director Duke Johnson, we are presented with figures who are eerily lifelike in their texture, skin tones and gestures. However, the realistic nature of these creations is subverted by a craftsman’s incision across the face at the level of the nose’s bridge; this feature has the disconcerting effect of allowing the faces to be more naturally expressive, while on the other hand drawing our attention to their artificiality. This mix of authenticity and artifice makes what ensues between Lisa and Michael equally creepy and affecting. Two words: puppet sex.

Having participated in the original radio play version aired in 2005, the three voices of David Thewlis, Jennifer Jason Leigh and Tom Noonan have reprised their roles in what sits as one of Kauffman’s more compact pieces of cinema. At the heart of this story is a damaged soul and the connections and barriers we erect between ourselves and others, consciously or otherwise. Some might recognise the name of the hotel as being typically Kaufman-esque, referring to the rare Fregoli syndrome, from which Michael suffers here: it is a condition whereby someone believes that everyone but them is the same person. For this role, Tom Noonan’s typically unremarkable customer service voice is fitting, simply because it is so unremarkable.

Anomalisa has the wit and lightness of touch that makes a film a Kaufman film. It has that tripping philosophical bent; a dose of mental acrobatics for the audience; an ability to switch seamlessly from poignancy to hilarity, such as during Lisa’s rendition of ‘Girls Just Wanna Have Fun’; and an isolated central character contemplating his role at the middle of it all.

Watching Kaufman’s work has always been an exercise in anticipation. While he has his recurring themes, how they materialise will always remain a mystery until they’ve happened. And it’s why we should be excited when filmmakers like him make their contribution.

Anomalisa is in cinemas from 4th February through Paramount Pictures.

Written By
Angus Tonkin
More from Angus Tonkin
Perhaps it is a reflection of these memoir-happy times that something like...
Read More