The only criticism one could make of the script for The Winter’s Tale is that in the age of 140 character tweets, it’s a bit on the wordy side. But that’s Shakespeare for you. The immortal bard was writing in a time long before social media, before grammar checking software functions which default to US spelling, and long before a humble writer such as this picked up pen and paper. He is basically fireproof and anyone who raises a voice against him will be shot down in flames. So, we won’t go there.

Similarly, Kenneth Branagh is very good at his job. His last mainstream movie was – of all things – Thor, The Dark World, which is about as Shakespearian as you can get within a superhero universe. Here he both directs the stage play and takes the part of doomed king Leontes whose jealous rage results in the deaths of his loved ones and the loss of a friend.

Filmed plays make a lot of sense on this distant continent; it’d be lovely to be able to see the real thing but this is about as close as we’ll ever get, short of the whole troupe coming down under. That said, it is odd seeing something like this on the big screen; one expects cuts to different actors, sweeping crane shots and other cinematic tricks.

Not to say there isn’t eye-candy; take the scene with Leontes standing with his back to the audience with snowflakes dropping from above; he’s in a spotlight which isolates him in the darkness of the rest of the stage. And there have been efforts made to camera cut between different actors at times and pull close-ups so it’s a little easier to follow the action. It’s definitely staged though, unlike the excellent BBC production of Hamlet, with David Tennant and Patrick Stewart, which was shot as a movie. 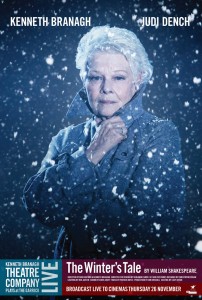 Overall The Winter’s Tale is a dark story of loss and potential redemption; we open with a group of royalty celebrating Christmas. Leontes has invited old friend Polixines (Hadley Fraser) to visit. When Leontes’ wife, Hermione (Miranda Raison) spends a little too much time with his old friend, Leontes falls into a paranoid rage, incarcerates his wife and sends Camillo (John Shrapnel) after him. What follows is the tragedy that faces all those who descend into paranoia, and true to form, Shakespeare bumps off a number of people, but Camillo’s hand is stayed because he realises Leontes has descended into madness. He hoofs it with Poloxines to downtown Bavaria.

Dame Judi Dench plays Paulina and takes on King Leontes while his kinsmen and advisors become “Yes” men. It is she who calls king Leontes out on his shit and tries to pull him back from the brink, and when he goes too far, she holds him to his failure, not to punish but to remind him of how badly things can go when you let your imagination run away with you.

And that’s just in act one. Act two on the other hand is a far lighter affair. For here we have romance, with Poloxines’ son Florizel (Tom Bateman) wooing the daughter of a poor sheep herder (Perdita, played by Jessie Buckley) dancing around each other as they slowly fall in love, while a villain with a heart of gold (Autolycus, played by John Dagleish) helps pull the strings together and bring the story to a logical, if magical, conclusion.

This is one of the more accessible of Shakespeare’s plays; it’s less of a slog than Hamlet, lighter than Richard III. And despite the carnage in the first half of the play (movie, whatever you want to call it), it ends on an up note. So if you’re up for watching some great Shakespearian actors on stage, then The Winter’s Tale is worth the price of admission.

The Winter’s Tale by the Kenneth Branagh Theatre Company is in selected cinemas from 30th January.