Spotlight is a film that creeps up on you. It’s the kind of film that slowly seeps its tendrils into you and it isn’t until the end credits when you realise the intense emotional investment that has been withdrawn. The nature of the crimes featured in the film illicits only the strongest visceral condemnation yet it is the scope and systemic cover up that is arguably even more heinous. Spotlight is a story within a story. A film that re-tells in purist cinematic language, the unveiling of one of the greatest cover ups of recent history.

Spotlight is the name given to the division of the historic Boston Globe newspaper whose team of four focuses on extensive detailed investigative stories. The film starts in July 2001 with the Spotlight team worrying if their division is to be axed by incoming boss Marty Baron (Liev Schreiber). To the contrary Marty assigns the team a new story. A Catholic priest has been molesting children for the last thirty years. Lawyer for the victims, Mitchell Garabedian (Stanley Tucci), alleges the Catholic body, specifically a Boston Cardinal, had known of the priest’s behavior for over fifteen years without action. 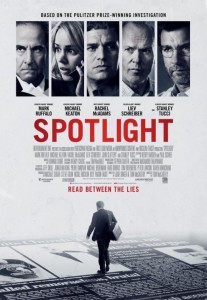 Drip by drip the team uncover incriminating information. It is riveting viewing even with a foregone conclusion.  Within a series of exponentially damning discoveries it’s surprisingly easy to get swept up in each journalist’s work. Equal parts astonishing and appalling, it’s eerie seeing actors scoff incredulously at potentially thirteen child abusing priests within Boston, knowing full well with viewer’s hindsight how tiny that number really is (all in all Boston had well over 100 molesting priests). The Spotlight team overcomes obstacles within the church, state, law and community to be the first journalists to really glimpse into the depths of a system designed to sweep abuse under the carpet, allowing horrendous numbers of children to be preyed upon and deriding adult victims. Twice repeated within Josh Singer and Tom McCarthy’s  screenplay is the damnable phrase ‘it takes a village to molest a child’.

This is the kind of feature that demands an attention span worthy of its filmmaking. Without being wordy and boringly factual the film does not over simplify nor become too emotionally indulgent. It is sublime filmmaking, all the more surprising considering its director and writer Tom McCarthy’s previous cinematic efforts have lacked the same depth and warmth. He deserves praise for this work as does his ensemble. There are too many great names to mention but outstanding performances are given by Michael Keaton and Mark Ruffalo as two of the journalists within the Spotlight team.

When dealing with such condemnable subject matter it would be easy to heap shame upon the guilty parties. Yet McCarthy lets the film’s facts speak for themselves with a subdued vitriol and a considered approach. Spotlight is emotional without being oversentimental, and factual without being judgmental. It is excellent filmmaking that creates a space for the viewer to ask one’s own questions. It is an important film to be made, considering one of the film’s major villains was promoted to Rome away from criminal prosecution. This, along with Australia’s own current royal commission into institutional responses to child sexual abuse, this film is as pertinent now as it was when Spotlight’s first story was published in 2002. This is an important homage to a brave journalistic team, and also an essay into the importance and relevance of investigative journalism itself.

Spotlight is in cinemas from 28th January through Entertainment One and on Blu-Ray, DVD & Digital 4 May, 2016.