Based on the best-selling horror series by R.L Stine, Goosebumps finds Zach (Dylan Monnette) and his Mum Gale (Amy Ryan) moving next door to the secluded Stine (Jack Black) and his daughter Hannah (Odeya Rush). Against the will of Stine, Zach and Hannah strike up a friendship, causing Zach to investigate further into the mysterious father and daughter. After breaking into Stine’s house with his chum, Champ (Ryan Lee), the two discover that Stine’s monsters are actually real and imprisoned within the locked manuscripts. After unintentionally releasing the monsters, Zach, Hannah, Champ and Stine must recapture all the creatures and return them to the manuscripts before they destroy the town.

Tim Burton and George A. Romero both had a crack at making a film based on the book series during the 1990s, with Romero even completing a script, but both projects eventually fell through. Presumably, Burton’s production was deemed more successful, with his fellow collaborators Larry Karaszewski and Scott Alexander credited with the story for the 2015 film by Rob Letterman. Their interpretation is great at combining some of Stine’s most memorable monsters and the premise sounds slightly familiar given that Sony released the similarly themed Jumanji twenty years ago. There’s distance enough between the two films that it doesn’t feel like a rip-off, with Stine’s stories covering most of the tracks. While perhaps not a truly original concept, it’s more satisfying than if it were simply based on just one of the Goosebumps stories. 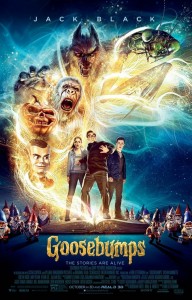 The screenplay by Darren Lemke then takes a less appealing turn with much of the film failing to fulfill its potential. Without fleshing out the characters or the story, the film becomes all too predictable and loses its momentum by the second half. Ultimately, it’s the monsters that suffer the most as a consequence of this lack of atmosphere. Mostly manifested through CGI, apart from Slappy the dummy, the monsters come across more as caricatures than as anything either scary or menacing. By making the monsters less frightening, it broadens their accessibility so much that they lose any chance of being any sort of danger to the characters.

Storyline aside, the performances in Goosebumps are actually pretty sound, given the little freedom the actors have with the characters. Black narrows his hyperactive goofiness to the reclusive and fatherly Stine, whilst also providing the voice for the only two speaking monsters in the film quite effectively. Amy Ryan is as outstanding as always, and Minnette and Rush are both believable and likeable as a young couple. Jillian Bell (Workaholics) as Zach’s aunty falls short with her usual brand of humour, but it’s Timothy Simons and Amanda Lund as the local police officers that get the most laughs, even if they’re only in the film for approximately ten minutes.

Assuming this film was trying to cater to older fans of the books as well as appealing to a new audience, Goosebumps stretches itself too thin in order to put a foot in both camps. Goosebumps may be rooted in a relatively imaginative storyline compared to modern films that wouldn’t have the guts to deviate in any way from the books. However, it’s everything after the bare bones of the story that just seems to have not been given any consideration, or a second thought.

Goosebumps is in cinemas from 14th January through Roadshow Films.

Written By
Edward Curtis
More from Edward Curtis
Everest is based on best-selling book Into Thin Air by Jon Krakauer,...
Read More