With The Revenant no one can accuse director Alejandro G. Iñárritu of resting on his laurels. After the technically audacious Birdman, Iñárritu channels his uncompromising vision into a completely different setting but with similar assured aplomb. Adapted from Michael Punke’s novel of the same name by Mark L. Smith, the film tells the extraordinary story of Hugh Glass, an American frontiersman who was mauled by a bear and abandoned, only to miraculously survive to seek vengeance. It is dark, violent and gruelling, but through Emmanuel Lubezki’s typically superlative cinematography and Iñárritu’s tenacious direction it is also intimate and majestic.

It is the 1820s, in the harsh wilderness of what is now South Dakota. Glass is tasked with navigating a sizeable crew returning to their settlement. However, they are ambushed by a Native American tribe looking for a young girl who was abducted and they suffer considerable losses. Soon afterwards, Glass is savagely attacked by a bear, and the group is confronted with a battle against time and the coming winter to make it back. The group separates, leaving Glass behind with his half-Native American son and two volunteers, including John Fitzgerald (Tom Hardy). However, Fitzgerald is more concerned with his own survival, and after a violent brawl Glass is left half-buried in a shallow grave. Inexplicably, and as the film continues incredulously, he musters the strength, resolve and fortitude to survive and seek retribution. 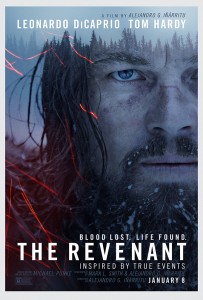 Iñárritu’s insistence on filming on location in extreme physical conditions and in all natural light imbues the film with a gripping, visceral realism. Hardy is solid as Fitzgerald, despite boasting an accent that at times made it difficult to understand him (and even though he wasn’t wearing the mask from The Dark Knight Rises. Or that other mask from Mad Max: Fury Road). But the film is anchored by DiCaprio, who shows another side to his diverse repertoire in a largely silent performance. Having been so accustomed to seeing DiCaprio in showy roles, it is refreshing to see him channel his energies inward to focus on strenuous physicality and restrained subtlety. DiCaprio has stated that this was the most physically demanding role of his career – he is swept along by freezing waters, eats raw bison liver and sleeps inside an animal carcass, all in the name of authenticity. And despite the increasing incredulity of the plot, the sheer immersive earnestness of his performance grounds the film and makes it consistently engaging.

But the other ‘star’ of the film is undoubtedly the scenery – as seen through the prodigious eye of cinematographer Emmanuel ‘Chivo’ Lubezki. Having recently lensed the vastness of space in Gravity and the cramped backstage corridors of a Broadway theatre in Birdman, he continues to prove his undeniable flair and versatility. The long extended take of the opening action scene is reminiscent of his renowned work in Children of Men, and Glass’ swirling, dreamy memories gesture towards the lyricism of The Tree of Life. And that’s not to mention the exquisite shots of light peering through trees and scenes of snow-capped, tree-covered mountains – the film is visually spectacular in evoking the transient and the transcendental, the intimate and the infinite, the personal and the profound.

There may appear to be a disconnect between the film’s jarring violence and its majestic beauty, as if the immediate human conflicts are somehow distinct from the timeless scenic backdrops. But arguably the film is interested in more than a tale of survival and revenge – it is invested in blurring these two scales. Frontiersmen are encroaching on lands and peoples and irrevocably leaving their mark, signalling towards the future environmental destruction to come. This perspective renders the beauty of the landscapes all the more breathtaking.

Overall, The Revenant is darkly brooding and strikingly beautiful, and it succeeds as both a thrilling, revenge story and an ode to the wilderness.

The Revenant is in cinemas from 7th January through Sony Pictures.