When faced with the prospect of a remake, especially when the original film was popular or good, one must ask if the remake is necessary. In the case of Point Break, the answer appears to be most certainly not. The original Point Break (1991) was – and continues to be – a very well liked film. Directed by Kathryn Bigelow and starring Keanu Reeves, Patrick Swayze and Gary Busey, the original is a great example of the action films of the early nineties: fast paced, plenty of tension, and a little humour for good measure. While it is not necessarily a ‘classic’ as such, it shares a place amongst a collection of films that spoke directly to a youthful audience. Point Break has the added bonus of situating much of its drama at the beach, in the surf. The remake of Point Break does not have any of the charm of the original, perhaps because Keanu Reeves and Gary Busey are missing, not to mention Bigelow absent from the director’s chair.

The new Johnny Utah (Luke Bracey) has joined the FBI, pushing his way through a law degree and an adult high school diploma in response to the death of his mate. Utah and his mate had been motor cross cyclists, attempting a never before seen stunt in a rocky mountain region. When the best mate over shoots the mark, Utah fails to drag him and the bike back atop the cliff in a tense, and slightly ridiculous, scene. 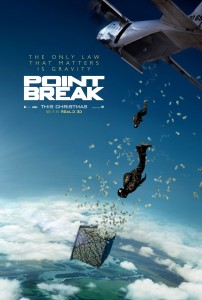 Now Utah is an FBI recruit, his dedication to his new pursuit in question from his commanding officer Hall (Delroy Lindo). Utah demonstrates his insight, identifying a criminal gang as extreme athletes attempting to complete the mysterious set of challenges known as the Ozaki Eight. He is given the green light to get out amongst the gang under cover, and is quickly sent to Europe. He heads out to where he thinks the gang will be next, a big wave surf in the middle of the ocean. When Utah tries to steal the wave, he is saved by Bodhi (Édgar Ramírez) and it looks like he has found the elusive gang.

What follows is one extreme stunt after another, as Utah infiltrates the gang of thrill seeking criminals. The gang have a quasi environmental philosophy; much of their crime serves as retribution for what they have taken from the earth in their exploits to fulfil the Ozaki Eight. Unfortunately the stunts, while visually amazing, do not have much to bind them together. There is very little plot to speak of, and the characters are terribly drawn. The acting is abysmal, such a shame given the Australian actors Bracey and Teresa Palmer getting a break in the Hollywood scene.

The new Point Break is written by Kurt Wimmer and directed by Ericson Core. Core’s experience as a cinematographer is evident as the filming is very good, along with stunning locations, and this makes for a visually interesting film. Unfortunately there is so little to make these efforts work. Apart from the poor story (hard to fathom, given there was a perfectly reasonable script in the original film), the dialogue is barely understandable. The characters speak in some sort of short hand or jargon, and with no set up for what any of this means at certain points they seem to be incoherent. At other points the dialogue is simply laughable, a particular highlight being the comment that ideas are “not as powerful as a whaling ship”.

Point Break is in cinemas from 1st January through Roadshow Films.

Written By
Amy Taylor
More from Amy Taylor
In the style of film where ordinary folk meet with hilarious and...
Read More