Joy is the most recent feature film from acclaimed director David O. Russell. The whirlwind biographical tale of Joy Mangano stars Jennifer Lawrence who delivers yet again with a wonderfully charismatic and nuanced performance. Joy Mangano is many things – mother, artisan, idiosyncratically independent, and a no nonsense New Yorker. Haunted by the promises of her childhood she transforms her domestic chains to become a wildly successful entrepreneur and the matriarch of a disjointed family.

Shackled by domicile duties Joy resides in a house of shades of white that conceal familial and household stains. Russell captures perfectly the insular and suffocating environment utilising only close and medium range shots. Joy serves her voluntarily bed stricken mother – who cares more about her soaps than her daughter’s well-being – as well as her immobile grandmother, and all while raising her own child. Residing in her basement is her ex-husband, and now platonic friend, Tony Miranne (Edgar Ramirez). Amongst this chaos, Joy’s father (Robert De Niro) woos wealthy widow Trudy (the scene-stealing and charismatic Isabella Rossellini). Joy convinces Trudy to invest in her invention: a self-wringing, machine-washable mop. Admittedly the premise sounds rather tame, but what unfolds couldn’t be further from that. Russell has found another hidden biographical gem to unearth a wealth of real and intimate humanity. This is a story of the strength and weakness of family, of warmth and humour, and the fulfillment of the American Dream. 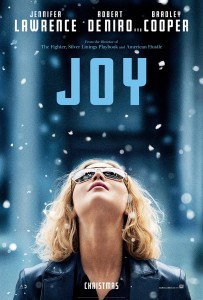 After seemingly endless financial and emotional troughs and summits, Russell has done the ludicrous, with the realisation of the ecstasy and euphoria of selling mops. He pulls back the curtain on the marketing and business world to reveal its ugliness and beauty. Yes, beauty – not something you would usually associate with corporate America – in a now default collective cynicism that society has towards a western world of ubiquitous advertising. The uphill battle and resilience of Joy against the status quo is inspiring and more than a little moving.

While the film is full of rich themes and striking relationships, it does have more weaknesses than the usual Russell picture. A lot of the film, in particular the last half hour, should have been left on the cutting room floor. Bradley Cooper appears to have been shoehorned into the picture as an afterthought. Playing Joy’s business acquaintance he was relevant for perhaps two scenes and yet a very forced connection particularly at the end leaves the viewer squirming. Half way through the film, occasional narrator and Joy’s grandmother passes away as a plot device that is met with an anticlimactic ‘oh’. Rather than the gut wrenching twist Russell was aiming for, any emotional attachment between Joy and her grandmother was severely underdeveloped. The story itself goes through a mini roller coaster of pits and falls in the last half hour that was unnecessary and leaves an otherwise great film with a bad taste. The film finally ends with a ten minute insipid voice over of a messy flash forwarded continuation of the story, followed by a last scene that was saturated with over-sentimentality.

With an outstanding cast Joy is for the most part a fascinating case study into a woman’s inner strength and determination.  But it is somewhat disappointing that Russell has stumbled over his very high cinematic bar. Ordinarily adept at walking the fine line of emotional gut wrenching personal drama, he indulges with saccharine at the wrong places. The bulk of the film is gripping and quite fascinating viewing. Lawrence’s performance is stellar with now frequent collaborator Russell.

Joy is in cinemas from 26th December through 20th Century Fox.