While fans eagerly consume a seventh Rocky film, a twenty-forth Bond, and a seventh part of that little-known franchise Star Wars, the announcement of a fourth Alvin and the Chipmunks has many people wanting to know: JUST WHEN WILL IT END? Weren’t three films enough? But in fact it’s been four years since the release of the third Chipmunk film, and there’s a younger demographic just waiting to be indoctrinated, so the answer is no, of course that wasn’t enough. There’s still money to be made!

Having never seen any of the previous films I approached Alvin and the Chipmunks: The Road Chip with trepidation. An opening party scene involving Redfoo did little to quell fears – there’s something unsettling about a guy known for misogynistic song lyrics appearing in a children’s film. But despite initial reservations, the film overall was surprisingly quite enjoyable. Whether it recycled much of the previous films is difficult to say, but judged as a standalone effort, you could certainly do worse. 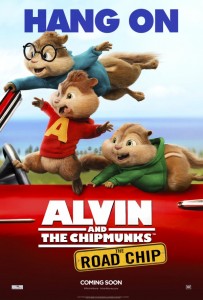 Having faded from the spotlight, Alvin, Simon, and Theodore are enjoying life with their owner/father Dave (Jason Lee), when he introduces them to his new girlfriend Samantha (Kimberly Williams-Paisley) and her son Miles (Josh Green). The chipmunks and Miles take an immediate disliking towards one another, and team up to prevent Dave from proposing to Samantha on a trip to Miami. With an angry air marshal (Tony Hale) hot on their tails, the four of them attempt to travel under the radar, but the chipmunks aren’t exactly known for their ability to go unnoticed.

The Road Chip – written by Randi Mayem Singer (Mrs Doubtfire) and Adam Sztykiel (Due Date) – is as formulaic as you would expect, but it’s good fun all the same. The film is paced well, and bursts with colour as the Chipmunks travel from L.A to Texas, New Orleans, and Miami. The musical numbers are the highlights – put any performance of ‘Uptown Funk’ in a movie and I’m sold (even if they are just filling the cup with ‘water’ this time). The choreography is joyous and energetic, and even Redfoo’s song ‘Juicy Wiggle’ ain’t half bad. Jason Lee has the “ALVIIIIIIIIIIN” yell down pat, but it’s Tony Hale who steals the show. He’s everything you want in a G rated villain, delivering physical comedy gold in spades. The chipmunks themselves are adorable (especially young Theodore) but you’ve got to wonder what the point is in having celebrities voice them.

Director Walt Becker isn’t going to win any awards for this one, and no doubt many critics will have made their minds up before even seeing his efforts here. The Road Chip doesn’t offer up many original ideas, and unlike Pixar it doesn’t try very hard to appeal to the adults in its audience. It will certainly, however, win favour with the kids, and it seems unlikely this is the last we’ll see of the chipmunks.

Alvin and the Chipmunks: The Road Chip is in cinemas from 26th December through 20th Century Fox.

Written By
Claire Robson
More from Claire Robson
The hills are alive with the sound of demon nuns and shitty...
Read More