You’d be hard pressed to find an Australian born in the last thirty years who doesn’t like dinosaurs. Indeed, the only thing more difficult would be finding a Pixar hater. As such, Pixar’s latest creation The Good Dinosaur should be a match made in heaven, particularly for the Jurassic Park generation. But Peter Sohn’s film is a major disappointment; The Good Dinosaur is well and truly a kid’s film, and not a particularly good one at that.

The problems begin with the lead character; Arlo (Jack McGraw and Raymond Ochoa) is the most useless protagonist Pixar has ever produced. The weasily-voiced Apatosaurus warrants sympathy for being an underdog, but the filmmakers gives us little reason to care about his growth. Unlike The Land Before Time’s Littlefoot, who is a modest leader and a friend to all, Arlo is jealous, paranoid, and easily offended. He’s not the kind of dinosaur you’d want to be friends with, and accordingly won’t be the toy that kids plead for this Christmas. After Arlo stupidly falls into a river, he goes on a quest to return home, to a family that barely cares about him. His reluctant companion is Spot (Jack Bright), a thieving and irresponsible caveman child who is nevertheless more likeable than Arlo. 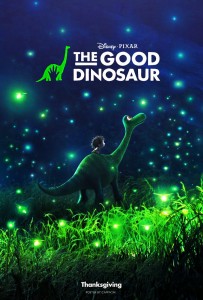 The adventure that plays out over the following ninety-odd minutes has its moments, but is plain compared to the stunning visual effects that accompany it. Not only are the CGI-generated landscapes wasted on this all-too-familiar plot, but so too is the use of dinosaurs. Indeed, The Good Dinosaur’s greatest flaw is that it isn’t really a dinosaur film. It’s a story about a pastoral anthropomorphic family, who just happen to be Apatosauruses. You could have supplemented any species of animal into the storyline and it would have barely changed the narrative.

You could have, for instance, turned Arlo’s family into lions, the velociraptors into hyenas, and the Laurasian forest into an African savannah. With that in mind, it’s hard to know whether The Good Dinosaur intentionally references The Lion King, or if Disney is trying to re-package its pièce de résistance to a new audience. Either way it’s lazy storywriting.

But whereas The Lion King mixed tension with comic relief, The Good Dinosaur takes itself too seriously for a kid’s film. There are light moments, but they exist to break up the intense scenes rather than exert a chuckle. Besides a cheeky, if not inappropriate, hallucination skit, the film provokes very little laughter. A few scenes may incite a tear or two, but that’s bound to happen when your script-writing team are yanking on your heartstrings every fifteen minutes.

The good news is that, aside from the cartoonish dinosaurs, the animation here is as lifelike as anything Pixar has ever made. The panoramas of mountains wouldn’t look out of place in a nature documentary, while the water is animated to perfection (and I don’t use that word lightly). If that level of detail floats your boat, then The Good Dinosaur is worth seeing on the big screen. But if you care too much about narrative and originality, it might be worth giving this one a miss.

The Good Dinosaur is in Australian cinemas from 26th December through Disney.

Written By
Kevin Hawkins
More from Kevin Hawkins
A man refuses to shit for a week. On paper, it’s not...
Read More