The latest effort from what might be termed the ‘Frat Pack’ sits in a slot that many of Hollywood’s recent attempts at comedy fall into; an almost Limbo-like position of mediocrity. Not bad enough to get passionately angry about and not good enough to recommend. The Night Before is almost the definition of the kind of hit-and-miss comedy that’s put together throughout the year, this time with some festive Christmas cheer to spice up proceedings. If the cinema of Seth Rogen and co. appeal to you this is exactly the kind of film that the fan base are after.

For over a decade lifelong friends Isaac (Rogen), Ethan (Joseph Gordon-Levitt), and Chris (Anthony Mackie) have gathered together on Christmas Eve and hit the town to celebrate the holidays, continuing a tradition that began when Ethan’s parents were killed by a drunk driver on Christmas. But the years are rolling on and everyone is getting older, with Isaac soon to become a father and Chris becoming a celebrity after making it big in the NFL. So for one final time the three don Christmas jumpers and, armed with tickets to the best Christmas party ever and an entire cornucopia of drugs, head out on the town for the pre-Christmas booze up to rule them all. Over the course of this adventurous night they run into Ethan’s ex-girlfriend (Lizzy Caplan) and meet up with a shady weed dealer Mr Green (Michael Shannon), who isn’t quite what he first seems. 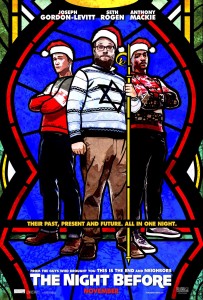 Director Jonathan Levine whose previous works include Warm Bodies and the decent 50/50 (which also starred Gordon-Levitt and Rogen), has made the kind of film that essentially writes itself. Most of the jokes are either pop culture references or penis jokes, the product placement is shameless, and the plot flimsily lulls along from one thing to another – perhaps a case of ‘too many cooks’ since four people have writing credits and some of the dialogue seems improvised. It also does that strange U turn that a lot of mainstream comedy does where amid all the swearing and gross out humor faux-serious subplots are woven in to try and trick you into thinking that the movie has a heart.

This isn’t to say The Night Before is without redeeming features, because there are genuinely funny moments. Anthony Mackie hasn’t done a lot of comedy before this and his comic timing is spot on – expect to see him returning to this kind of film again. Seth Rogen is always funny and a scene with him at a dinner table had the audience I was with in stitches. But the true stand-out is the always commendably Michael Shannon who clearly has a lot of fun as a riff on Dicken’s A Christmas Carol and seems to be playing off his persona as being a deadly serious actor who has what is quite possibly the most intimidating stare in cinema.

Another large part of whether or not this film will appeal are your feelings towards Christmas. If, like me, you see Christmas trees being set up and people driving around with reindeer horns and red noses on their cars with a mix of weary resignation and barely concealed distaste, then it’s probably a good idea to give this a miss. But if you do get into the spirit of the silly season there’s a lot of fun to be had.

The Night Before is pretty much what you’d expect, not terrible enough to rant about and not good enough to spend money on seeing at a cinema. It’s just kind of there. To its credit it’s never boring, there are a few scenes that are laugh-out-loud funny, and most of the performances have a nice weight behind them, but it’s the kind of listless comedy film that starts fading from memory the moment you walk out of the theatre. But if we’re being honest here, the target audience for these kinds of films don’t care what critics say from atop their high horses, and if you like this kind of film: Go for it.

The Night Before is in cinemas from 3rd December through Sony Pictures.