The Look of Silence is the second documentary from director Joshua Oppenheimer to examine the mass genocide in Indonesia in the late 1960s. It is estimated that more than half a million people were killed in an effort to purge the country of communists. Following on from The Act of Killing (2012), The Look of Silence traces the journey of an anonymous man as he speaks candidly with some of the killers and their collaborators.

The anonymous man, referred to during the film only as Adi, is now in his forties. Just a few years before he was born his older brother was brutally killed for allegedly being a communist. During the film, Adi talks with his parents who are both now very elderly. His mother describes her grief at losing her older son, about the fear they felt – and continue to feel – with members of a killing squad living freely in their community. Adi is an optometrist, and under the pretext of providing members of the community with glasses, he visits with some of the killers. Adi asks simple questions which garner frank answers about the brutality and horror to which so many people were subjected.

Adi is shown footage – presumably left over from the earlier film – of some of the killers talking about the acts they committed. In some footage two of the men clumsily re-enact the killing of Adi’s brother, describing the man’s resistance to death and the extra efforts that they had to undertake. While there is no actual violence shown, their honest descriptions about the pitilessness of their actions is chilling. 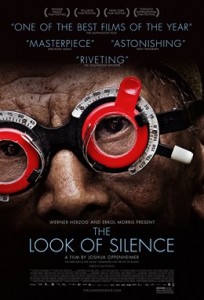 The Look of Silence is exquisitely filmed; the cinematography is absolutely gorgeous. Cinematographer Lars Skree makes use of extreme close-ups which serve to humanise everyone in this story with terrible effectiveness.  Adi handles himself incredibly in the face of appalling revelations, but the pain and distress is apparent when the camera holds its gaze on this patient man’s face.

This film is hard to stomach. The killers describing their actions is gut-wrenching. With no real archival footage or re-enactments, the horror and violence stems from men recounting stories of actual atrocities. Their lack of remorse is staggering – one man suggests that he is worthy of a reward from those who taught him to hate communism. Another man explains that many of the killing squad members went mad, but he and others avoided that fate by drinking their victim’s blood. Yet age and time somehow renders these former monsters harmless, more foolish in their ignorance than frightening.

The Look of Silence makes for difficult but compelling viewing. Films such as this one are crucial, especially since so many of the crew and subjects remain anonymous for the sake of their own safety.  When we stop listening to these stories, and when they stop being told, then the chance of history repeating becomes all the more likely.

The Look of Silence is in cinemas from 26th November through Madman Films.

Written By
Amy Taylor
More from Amy Taylor
Set in Sydney, Alex & Eve is about the clashing of culture and...
Read More