Not every film has to be a spectacle. Sometimes it’s nice to see a simple story told really well. The Crow’s Egg (Kaaka Muttai) is a perfect example of the ingenuity of artful simplicity.

Two boys – Small Crow’s Egg (V Ramesh) and Big Crow’s Egg (J Vignesh) – live in the slums of Chennai. Their father is in prison, and no amount of legal assistance or political advocacy seemingly can bring him home. Their mother (Iyshwarya Rajesh) struggles to balance managing the two boys, visiting her husband (Nivas Adithan) and caring for her mother-in-law. The boys live in a concrete and tin shack, one of hundreds in a shantytown, sleeping on the floor with their mother and grandmother (Shanthi Mani).

Small Crow’s Egg and Big Crow’s Egg adopt their nicknames from the eggs they steal from crow’s nests and eat raw to supplement their meagre diet. The boys collect coal which falls from the freight trains as their way to contribute to the collective family earnings. They play bare foot with their friends, other kids from the same concrete maze-like village. Their play ground – a vacant lot– is sold for development, and the kids are forced to find elsewhere to meet.

Soon the vacant lot is developed, a development which includes a pizza shop. The two brothers now have a dream, to try a slice of pizza. In a world they both barely understand, they embark on a mission to buy some pizza. 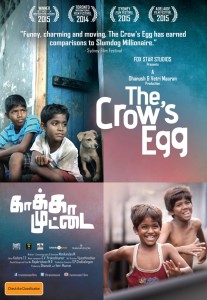 The Crow’s Egg is so charming and delightful to watch, with the two young boys giving charismatic and endearing performances. Their faces are beautiful and expressive; the characters they are playing are innocent yet clever. This could be a very bleak film, given the setting is one of poverty and the characters are subject to corruption and ill treatment. Yet somehow these issues seem unimportant. They do not factor much to the two boys who go about their days with all the vigour expected of children their age. Their mother and grandmother make sure to keep the boys relatively sheltered from the worst of the corruption and politics of the slum community.

The focus of The Crow’s Egg is the determination of the two boys to overcome all the obstacles in the way of their first taste of pizza. The pizza becomes symbolic of grander ideas in this film, representative of the class struggles and division of rich and poor. The pizza parlour is owned by wealthy and corrupt businessmen who bring in local celebrities to open the new store. Street kids are fenced off, allowed only to view the luxury from a distance. The two boys befriend a middle class kid through the fence of his enclosed playground. He tells them about the frequency of pizza deliveries to his home, something they could only imagine.

There is such joy in watching this film – the gorgeous faces and infectious smiles are hard to resist. There are no bells and whistles, just great storytelling. It is wonderful to see films which give insight into both the hardship and the joy in the lives of people who might otherwise be overlooked.

The Crow’s Egg is in cinemas from 19th November through Transmission Films.

Written By
Amy Taylor
More from Amy Taylor
Sleepless in Seattle has become a bit of a classic, especially for...
Read More