How could a film be more perfect than All About Eve? It may not be possible. Written and directed by Joseph L. Mankiewicz, every moment of this film is flawless in its execution. The film is a sublime viewing experience.

The film opens at an awards dinner, where a bright new star is to be awarded the highest honour. The scornful voiceover of theatre critic Addison DeWitt (George Sanders) recounts how quickly the new winner rose to fame. As the camera pans the room it is quite clear that the newest star is despised by her female peers, the males having little better attitudes. As the young winner approaches the dais to accept her award the frame pauses, a gun mounted on the wall points straight at her heart.

A year earlier and Eve Harrington (Anne Baxter) of the titular glory presents herself in New York. She is shabbily dressed, hanging about the backstage door of the theatre after a performance. Karen Richards (Celeste Holm), wife of the playwright, takes pity on Eve and asks her to meet the star and Eve’s idol, Margo Channing (Bette Davis). Karen and her husband Lloyd (Hugh Marlowe) are enchanted by Eve, and Margo decides to take Eve on as an assistant. 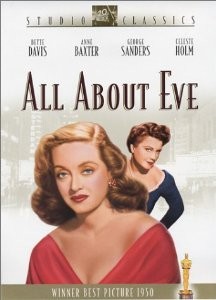 Eve proves indispensible to Margo, anticipating her every need. Margo seemingly cannot do without Eve now, especially as Margo’s boyfriend Bill (Gary Merrill) plans his return from Los Angeles. Eve has planned Bill’s birthday party, sent him a telegram and even placed Margo’s own birthday call, much to the surprise of Margo herself. It becomes more and more apparent that Eve has grander plans for herself than merely to be the assistant of a star; she expects to be a star in her own right.

Eve manipulates her new friends to do her bidding, playing on Margo’s insecurities about her age and her relationship with Bill. Eventually Eve has her way, succeeding in filling in for Margo as her understudy when Margo is curiously detained. With her one-off performance a success, Eve looks headed to rival Margo’s achievement.

It is almost impossible to find fault in the performances in All About Eve. Bette Davis is in her element as Margo Channing and Anne Baxter is great as the cunning, if not slightly deranged, Eve. Support cast are fabulous. George Sanders is dry and unscrupulous, delivering cynical and snide comments with perfect charm. Thelma Ritter plays Margo’s dresser Birdie, and her hardened suspicion is the perfect contrast to Eve’s phony wide-eyed innocence.

All About Eve is perhaps one of the best examples of film making of the classic Hollywood era: great cinematography, excellent performances and a fantastic screenplay. Nothing superfluous, everything essential. It is no surprise this film won Oscars for both best director and best screenplay, as well as a Special Jury Prize at Cannes. This film can be viewed over and over; it never gets old.

All About Eve is screening as part of The Hollywood Retro Film Festival at Cinema Nova. The festival runs from 26th November until 16th December.

Written By
Amy Taylor
More from Amy Taylor
The Royal Shakespeare Company in Stratford-Upon-Avon have produced a rendition of Much...
Read More