A searing critique on American capitalism framed around the financial crisis, 99 Homes establishes its intensity from its extended opening shot that, set to a pulsing soundtrack, introduces us to a man who has just committed suicide after his house has been foreclosed on, and the man who will benefit from it. Co-written and directed by celebrated American indie filmmaker Ramin Bahrani, the film is a deeply affecting drama about the price of a man’s soul.

That man is Dennis Nash (Andrew Garfield), an out of work construction worker who has his house repossessed by a wealthy real estate tycoon, Rick Carver (Michael Shannon). Forced into living in a dive motel with his mother (Laura Dern) and son (Noah Lomax), and no prospects for employment, he finds himself working for Carver who, in the mold of Gordon Gecko from Wall Street, takes a shine to him and puts him to work as his protégé. It’s not long before Nash finds himself involved in a series of scams and throwing people out on the street just like he was, all the while trying to keep it a secret from his family. Eventually his resolve to make a living by any means necessary is put to the test as he finds himself in a moral free-fall. 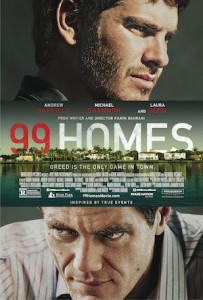 99 Homes is a film very much rested on the performances of its two leads. Michael Shannon, who has been uniformly excellent in everything he’s been in for the last fifteen years and tailored a niche career as a character actor alternating between big budget Hollywood fare (such as Man of Steel) and more celebrated smaller work (Shotgun Stories and Take Shelter, among many others) is a force of nature as Carver. He totally embodies the ruthless professional, but does so in a way that makes him completely human, and all the more horrifying. Less impressive is the miscast Garfield. A talented actor (he is perhaps the one saving grace of the latest round of Spiderman films), he feels disingenuous as the uneducated, working class man and seems to be putting on a performance to make up for it.

The film is stylishly directed by Bahrani in a low key, naturalistic manner that perfectly suits the subject matter. His script (with Amir Naderi, based on a story he wrote with Bahareh Azimi), suffers from its clear influence from Oliver Stone’s film, particularly in the ‘greed is good’ styled speechifying from Carver (although Shannon’s delivery more than makes up for it).

Despite its shortcomings, 99 Homes is a thoroughly engaging drama, told with honesty and emotion, it just isn’t the great film that it should have been and wants to be.

99 Homes is in cinemas from 19th November through Madman Films.