Secret in Their Eyes benefits from the superior acting ability of Julia Roberts, Chiwetel Ejiofor and Nicole Kidman in the lead roles. Billy Ray directs a stylish and competent thriller, but it is Roberts who steals the show here.

The film opens with Ray (Ejiofor) returning to Los Angeles to meet with District Attorney Claire (Kidman), after thirteen years out of town. When Jess (Roberts) stops by Claire’s office, Ray tells her he has finally found a target they have all been after. Flashing back to 2002, Ray and Jess are working together in the FBI counter-terrorism team, set up under the premise that Los Angeles is the next city to be targeted. The film’s soundtrack is made up of radio and television news bulletins detailing the threats; a workman installs surveillance cameras to streetlights.

Jess and Ray are jovial in the office; their banter betrays their close relationship. When Claire joins the DA’s team, Ray’s attraction to her is obvious to all. Then Jess’s daughter is murdered, her body dumped outside a mosque that has been under surveillance by Jess, Ray and their team for some months. Ray and Claire work to bring the killer to justice, but they are at odds with the chief District Attorney who prioritises terrorist threats over a lone murder victim. The film moves back and forth between 2002 and 2015, highlighting how much – and how little – has changed in the 13 years. 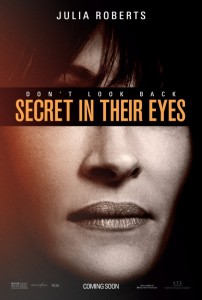 Julia Roberts is flawless in her portrayal of Jess. She is a slick FBI investigator, shiny hair, great suit and shoes, complete with cute socks. She has a fantastic rapport with her male colleagues, she is quick with witty repartee and the team clearly respect her as their peer. After the death of her daughter there is an obvious deterioration in Jess; she seemingly ages 15 years in a matter of moments.  Roberts’ performance is understated and subtle, as she gradually leads the viewer to the harrowing denouement. Ejiofor and Kidman are excellent also, their portrayals of Ray and Claire measured and well delivered despite a somewhat trying subplot.

The problem with this film is in the screenplay. The ethical and moral questions at play in this film are common to cinema, however this film does not trust its viewer to reach a conclusion. Instead of allowing the viewer to be subtly lead to the resolution, the script and editing spell everything out, word for word. This is disappointing, as ambiguity is surely an asset to a film of this nature, where the hypothetical teeters so close to the absurd. The premise that an FBI agent’s daughter becomes the victim of murder, and whose body is then disposed on the very site the agent and her team are monitoring is somewhat far-fetched. This is not such a problem at superficial viewing, but upon closer reflection the cracks in plausibility starts to show.

Secret in Their Eyes comes close to resembling the cannon of films adapted from John Grisham novels. That’s not to say it is bad, just that it is barely better than the mass produced, generic styling of the crime drama staples. With such an accomplished cast this film should rank much more highly.

Secret in Their Eyes is in cinemas from 19th November through Roadshow Films.

Written By
Amy Taylor
More from Amy Taylor
While Boys in the Trees is certainly very stylish, this film leaves...
Read More