Zombies? Check. Explosions? Check. Homemade weaponry? Check. Blood and gore? Check. Boobs? Check. What more does a schlock/horror/comedy hybrid need? Scouts, it would appear. Scouts Guide to the Zombie Apocalypse is a well written, well directed, well cast romp of a film. It’s a little silly, but in all the ways a film of this nature should be.

Ben (Tye Sheridan), Carter (Logan Miller) and Augie (Joey Morgan) are best friends, the trio having met early in their schooling when they all joined the scouts. Now entering their final year at school, Ben and Carter are getting the feeling they have outgrown the scouts. With no new recruits and their senior year looming, they are trying to find a way to break the news to Augie. Augie has is about to get his Condor Badge, and they boys want to find a way to break the news after their night camping out in the woods to celebrate the achievement.

Ben and Carter drive out to the campsite, debating the rights and wrongs of their ditching the scouts. En route they hit a deer, damaging Ben’s car. Carter’s sister Kendall (Halston Sage) stops by with her friends who offer to assist, and who invite Ben and Carter to a secret party for seniors only. Carter is convinced that this is far cooler than the scouts camping trip and persuades Ben that they will sneak off in the night to join the party. Mysteriously, while the boys talk to Kendall the deer disappears, despite clearly having been dead with its innards spilling out. 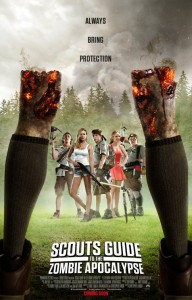 When Ben and Carter do sneak away, much to the disappointment of Augie, they discover the town deserted. Spying an opportunity to sneak into the strip club (‘Laurence of A Labia’), Carter drags Ben inside. What they find is a zombie stripper, ready to eat their faces off. Saved by high school drop out turned cocktail waitress Denise (Sarah Dumont), they discover the town is overrun by zombies. Ben and Carter make peace with Augie when he saves them from a zombie attack, and the three boys and Denise find themselves in charge of saving the town from the zombie plague.

This film works within the formulas, but it does so really well. It is tight with time, just over 90 minutes, and there is no fluff or filler, nothing superfluous. The writing is really good, and the film is well produced and directed. Writer/director Christopher Landon is best known for his work with the Paranormal Activity franchise, Scouts Guide being only his third feature direction.   The writing team of Carrie Evans, Emi Mochizuki, Lona Williams, and Landon are all in the early stages of their careers, but this script indicates they have potential. Most impressive is the casting, especially as the team are relatively unknown. The revelation here is the three leads actors as Ben, Carter and Augie. They have great comic timing when it comes to the funnier moments; they hit their cues perfectly. But, a bigger ask, they are really convincing during the more poignant moments. It was really easy to accept their characters and the boys were easy to like. Dumont as Denise was a good balance to the trio; if anything she was under-utilised and could have been given a bigger role.

Mostly, Scouts Guide to the Zombie Apocalypse is a very funny endeavour. Seeing Augie sing a duet of a Britney Spears number with a homeless zombie is funny and oddly sweet, especially when the other boys realise the ploy and join in. To have the zombie explode into fragments mid song tempers the sweetness, but not the hilarity. This movie is a little ‘dumb’, but surely that’s the point. It is completely enthralling and pure escapism. It will be interesting to see if this becomes something of a franchise, as there are certainly a few other scenarios that could use the preparedness and can-do attitude of a bunch of scouts.

Scouts Guide to the Zombie Apocalypse is in cinemas from 5th November through Paramount.

Written By
Amy Taylor
More from Amy Taylor
Directed by Travis Knight, Kubo and the Two Strings is the fourth...
Read More