A cynic might point out that Man Up bears more than a passing resemblance to other British romantic comedies. But this would be to ignore the fact that most movies are formulaic in nature, and that in this case, the formula has been tweaked enough so that the movie leaves one with a smile on their face upon leaving the cinema. Which is surely the point of entertainment isn’t it?

The nice thing about Man Up is that it shows introverted people in a positive light. Everything in the media is geared toward outgoing, happy, extroverted people, and introverts seem to always get short shrift. So seeing characters who find large-scale social situations awkward and difficult, and yet who are confident and engaging in smaller groups, goes a long way to push this movie well above the usual soppy mush that rom-coms usually entail.

Man Up opens with a scene that any introvert can surely relate to: a party invitation. Nancy (Lake Bell) is sitting in a hotel room trying to prepare to go down to an engagement party, for friends who have been kind enough – depending on your point-of-view – to set her up with a date. She tries to make herself look “good”, she imagines conversations, and finally gives up, preferring to spend the night with Hannibal Lecter and The Silence of the Lambs rather than confront so many people in one place, not to mention the date. 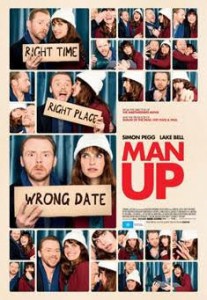 On a train the next day, she’s confronted by enthusiastic, pretty twenty-something Jessica (Ophelia Lovibond) who waxes lyrical about a self-help book she’s carrying, and that Nancy needs something like this to pull her life together. Nancy has similar pressure from family and friends, and respectfully declines the help.

But waking after the journey, she finds Jessica has left the book behind (and is off in search of another copy at the bookshop in the train station because it’s a signal to a prospective date she’s been set-up with). Nancy gives chase, but is intercepted by the date in the form of Jack (Simon Pegg).

Right now, she can can (a) tell Jack she’s not the date, or (b) go with it, because, well, he’s Simon Pegg and he seems nice enough, and didn’t Jessica and her sister talk about being impulsive and about synchronicity and all those words that self-help people usually talk about? Nancy’s character is revealed rather than developed over the course of the movie; she’s an intelligent woman, who has found it easier and nicer to seek her own company than that of others. She’s reluctantly drawn out by the chance meeting, so when she does reveal herself, it’s with a mask, which is ultimately liberating.

It’s a classic mistaken identity situation, where the fork in the road can lead to more of the same, or something a little more interesting. Cary Grant got it in North by Northwest, and here, thanks to writer Tess Morris, we also get the road less travelled — or at least, the road we’d all like to travel if we had the courage to do so.

The other thing about Man Up is that it’s got an energy to it which seems lacking in a lot of US comedies, thanks to Ben Palmer, the director, and film editor Paul Machliss. There’s a sense of movement, even in the scenes where characters are just talking to each other over a table, and a feeling at times of being a voyeur as they react to one another, a sign of good writing. The comedy is kept simple but effective through the use of visual cues, such as a discussion about relationships on the dancefloor of a club, while Nancy and Jack mouth the words to a Duran Duran song. A toilet scene which is perhaps one of the hardest things to do without reverting to poo jokes, becomes a touching way for the characters to finally connect, and perhaps is the final spark to show they need each other’s company.

Rory Kinnear (an actor who seems able to alternate between flat-pack banal in James Bond, and a psychotic monster in Penny Dreadful) is the fool that reveals the truth, sort of a narcissistic Pierrot. But even he, as perhaps the most broadly painted character of all, has enough of a back-story to balance his creepiness with comedy. He is the catalyst to stop the lies between Nancy and Jack, and show them their true natures.

There’s a lot to like in Man Up, other than perhaps the title which seems to smart of testosterone and arrogance, perhaps the only criticism one can level at the movie. The team behind the movie keeps the story moving, and keeps taking the road less travelled, avoiding predictable tropes such as the “soppy music montage” when things go very wrong for Nancy and Jack. Yet when they do go down a well worn route, they keep it interesting, varying the action from the predictable.

Bottom line: Man Up is a satisfying comedy which delivers on its promise.

Man Up is in cinemas from 5th November through StudioCanal.

Written By
Lisa Sinclair
More from Lisa Sinclair
This week's episode of Orphan Black is like a bright pink Macaron,...
Read More