It’s easy to criticise the US what with its ridiculous gun laws, extreme conservatives, and woeful healthcare system, but Freeheld reminds us of something that they have finally managed to get right, while Australia languishes embarrassingly behind. Based on Cynthia Wade’s 2007 Oscar winning short documentary of the same name, Freeheld concerns a key moment in the road to marriage equality, with an individual focus.

In 2005, Lieutenant Laurel Hester (Julianne Moore) fought to claim pension benefits for her lesbian partner, Stacie Andree (Ellen Page) after being diagnosed with terminal lung cancer. Ocean County government officials – known as Freeholders – denied her request on the grounds that county employees could only have their benefits passed on to their married partner in the event of their death. With the assistance of equal rights activist Steven Goldstein (Steve Carell) and her friend and partner on the force Detective Dane Wells (Michael Shannon), Hester spent her final days fighting for justice and equality with the aim of overturning this ruling. 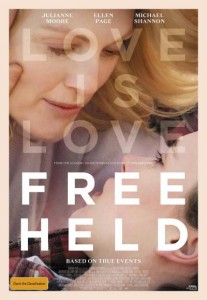 Screenwriter Ron Nyswaner (Philadelphia) creates a deft balance between a story about two individuals in love and the broader political climate. The first act traces the development of the two women’s relationship prior to Hester’s diagnosis. Hester tries to keep her sexuality a secret due to the discrimination she would be likely to experience in the workplace, with Andree clearly hurt at having to be hidden away. Once Hester is diagnosed, the secrecy is no more, with Hester determined to enable Andree to keep the house they built together. When Goldstein tells them his grand plan for their case, they inform him they’re not fighting for marriage equality. He provides the bigger picture, that is, that their fight is part of a larger quest for equal rights. In the final third of the film, much of the focus is on those helping Hester – Goldstein and his followers, Detective Wells, and her colleagues. It is a personal story, but one that has wider ramifications for society and the changing tide in attitudes to marriage equality.

Julianne Moore follows up her Oscar winning performance in Still Alice with another tearjerker that tracks her declining health, and as expected her transformation is once again faultless. Ellen Page – also a co-producer on the film – is superb as Stacie Andree (who reportedly shows up as an extra in the film). Their chemistry is hit and miss – Page’s attraction towards Moore is utterly convincing, more so than the other way around, but that may be due to Hester being the more closeted of the two. Steve Carell is a delight as the flamboyant and passionate Goldstein, and Michael Shannon is simply beautiful as Wells, who demonstrates exactly how same-sex allies should be.

It is apt that Peter Sollett’s Freeheld was released in the same year that the US declared same-sex marriage legal in all fifty states. This is mentioned in the closing credits and brought tears to this reviewer’s eyes – partly in pride of a country who did the right thing, and in shame of her own for lagging so far behind. Freeheld is an important contribution to cinema in the ongoing struggle faced by LGBT minorities, and like the recent Holding the Man it contains a simple and important message that should be heeded by all: love is love. It really isn’t that complicated.

Freeheld is in Australian cinemas from 5th November through Entertainment One.

Written By
Claire Robson
More from Claire Robson
It’s been said that if you come out of a film thinking...
Read More