The Last Witch Hunter begins in 14th century undisclosed Europe. It opens with Vin Diesel as fierce warrior, Kaulder, rocking a beard on par with his own character in terms of coolness. He leads a rag tag group of men tasked with assassinating the Witch Queen and ending the black plague she has inflicted on the world. After a great start and despite an interesting premise, the film falls flat fairly quickly.

Valiantly, Kaulder slays the witch and is cursed by her dying words with immortality. Flash to the present and rather superfluously the unique voice of Michael Caine informs us that witches are real, and Kaulder is infamous amongst Wiccans as the witch hunter. Not perturbed by being typecast, Michael Caine plays the confidant and aide of mega rich play boy Kaulder under the title of the 36th Dolan. The Dolans are priests who help Kaulder arrest any wayward dark witches. 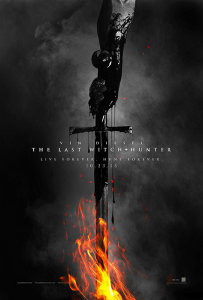 After announcing his retirement from the order, Michael Caine’s character meets a suspicious end.  Following this, the new Dolan (Elijah Wood) helps Kaulder to investigate his predecessor’s suspicious death. With limited information available, Kaulder decides it’s pertinent to enter his own mind to retrieve a memory he has a hunch will be useful. After a futile effort, he arrives at Michael Caine’s death bed and determines that he’s not really dead. He just looks like he died. Easy mistake. It gets a lot more ridiculous, which all things considered isn’t that bad. No attention span can waver with writing this audacious. Kaulder continues trying to enter his memories and befriends witch Chloe (Rose Leslie) upon the way. Together they unravel a plot, concocted by present era evil witches to resurrect the Witch Queen.

There’s very little to like about The Last Witch Hunter. To name the few positives, firstly there is a nugget of a great fantasy tale hidden beneath layers of awful dialogue and a terrible script. The best parts of the film are the fantasy elements. The fight scenes and CGI sequences are memorable. The evil witches are gruesome and a few monsters beguiling. Transposing the idea of a dark fairytale of witches and magic in modern New York is quite interesting viewing. But this does little to redeem the film.

The main problem with the film is in the writing. Perhaps too many cooks in the kitchen. Cory Goodman, Matt Sazama and Burk Sharpless are all credited as writers. Their character motivations and plot will entertain anyone not just capable of a casual suspension of logic, but adept at it. An equal problem is the dialogue. The clichés and over the top cheesiness is passable at best, but the fifteen second explanations in tense situations to band aid/bridge plot holes come off as lazy and effortless.

There isn’t much subtext to this fairly superficial film. The cookie cutter good and bad witch’s power over the elements could be representing the duality of nature but perhaps that’s pushing it. The character motivations are nonsensical. It’s a testament to Elijah Wood’s and Rose Leslie’s thespian skills they were able to deliver their more over the top lines with a straight face. Vin Diesel is, as always, effortlessly cool on screen. Fans of his work and fantasy genre nerds with low standards will enjoy this film more than others.

The Last Witch Hunter is in cinemas from 29th October through Entertainment One.