The problem with most recent American rom-coms is that they’ve been neither romantic enough nor funny enough. Judd Apatow’s overly long and underly funny movies, which seem to dominate the thoughts of studio execs and the screens of cinemas, are the prime example. The failures of Apatow’s insistence on improvisation and ‘finding it in the edit’ are shown up when a rom-com comes along with a confident and sharp script. When rather than long takes designed around finding the best quip, dialogue between characters sizzles and flows. This is what we get with Leslie Headland’s Sleeping With Other People.

Like Apatow’s Trainwreck, Sleeping… is a sex-focused rom-com about monogamy-shy characters, and they both star former SNL actors in leading man roles. But you get the feeling that Sleeping… is closer to the film that Trainwreck was aiming to be, before it got bogged down by Apatow’s baggage. It’s a reworking of the Hollywood rom-com template that challenges the ‘rules’ of the genre. It’s delightfully sweet and funny in its best bits, but also runs dark and true in its more dramatic moments. 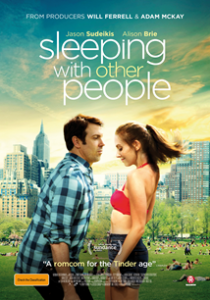 The movie’s rom-com hook is that the two leads, Jason Sudeikis’s Jake and Alison Brie’s Lainey, take each other’s virginity after a chance meeting in college. Twelve years later they find themselves serial cheaters and then, after she breaks up with her boyfriend whom she cheated on 16 times and he chases down the street the woman whose best friend he slept with, in the same sex addicts meeting. With their shared problem, and despite the obvious sexual chemistry (that they have to develop a safe word to keep to a minimum), the two decide to enter into a platonic friendship.

The unavoidable comparison and reference point here is When Harry Met Sally, with even a Katz’s Deli-style scene on the art of self-pleasure, but Sleeping… never feels derivative or contrived and the relationship grows and moves in a satisfying way. The characters feel lifelike, flawed and organic, and the chemistry and repartee between Sudeikis and Brie really works. Brie, whose Lainey suffers from a destructive addiction to her fling Matthew (Adam Scott, excellent as a man whose bland, boringness is so encompassing as to be positively evil), mixes the fun and light from her Community performance with the kind of darkness that she would have no doubt experienced on Mad Men. Meanwhile Sudeikis has never been this good or affable on screen. He’s an unapologetic womaniser, but without the smarm or generally ‘bad guy’ traits that usually come with that role. He’s funny, sweet, nice, attentive and hard not to like.

Though Sleeping… has its problems – sometimes it can’t seem to decide what kind of movie it wants to be, and finishing ten minutes earlier before some too neat final scenes would have made a real difference – it’s very hard to deny its charms. Yes it’s built upon a familiar genre outline, but there is enough in the design and decoration – from the chemistry of the leads, to the performances of supporting players like Jason Mantzoukas and Andrea Savage – to make this more than worth the time.

Sleeping With Other People is in cinemas from 29th October through Madman Pictures.