The Ghost Dimension is the sixth instalment from the Paranormal Activity producers in as many years, but don’t worry, we have been promised this is the last one. One of the surprise break-out hits of 2009, Paranormal Activity legitimised and helped pioneer found footage. The low budgets and great returns have ensured that even in 2015 we’re still being haunted by demons, possessions, and VHS quality shaky cam.

This film continues the tradition of casting relatively unknown actors into the archetypal roles of previous films. There is the cocksure and inquisitive father (Chris Murray), the worrying and doting mum (Brit Shaw), and their young daughter Leila (Ivy George). The new family has moved into the haunted and rebuilt property and are joined by newly single ‘Uncle Mike’ (Dan Gill) needing a place to stay. Whilst cleaning out the attic, dad Ryan and uncle Mike find a collection of home video VHS tapes and a rather clunky and interesting video recorder. After switching it on, Ryan quickly clues on that this is no normal recorder. This machine can view and record – wait for it- paranormal activity.  Joking aside, this is a welcome innovation into a series that was beginning to go stale with formulaic plots. After establishing that things aren’t quite right with their new lease, the brothers begin going through the archives of VHS home videos. The brothers uncover what is essentially a Wiccan space time divination training video of young sisters and previous inhabitants Katie and Kristie. (Katie will be remembered as the star of the original film). It is quite an audacious script from lead screenwriter Jason Pagan, yet it works well and isn’t nearly as silly as it sounds. It was quite a big ask to tie up a few of the loose ends and unsolved mysteries of the previous films, and the film diligently delivers for the most part whilst retaining its own unique premise to hook viewers in. 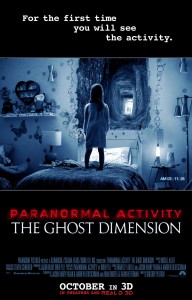 As a story the film stands on its feet okay enough, but in terms of horror it excels. With the feature of being able to detect previously intangible entity ‘Toby’, the filmmakers have found new and exciting ways to create suspense. With an opaque and corporeal creature the tension is definitely amplified from previous films. A welcome return are the fast forwarded dead of the night trance sequences which are always so unnerving! Unlike previous films the frights are enough to keep at bay the lingering question of why characters insist on filming terrifying moments with their family in mortal danger.

If you’re a fan of the franchise this isn’t one to miss. Quite arguably Ghost Dimension is the best of the Paranormal sequels. Whilst answering a lot of questions it still leaves certain doors open for one’s own conscience to ponder, which is often quite a difficult balance for any horror to strike right. By no means has director Gregory Plotkin created a perfect film but this is a well paced, 90min popcorn hit released just in time for Halloween. There are plenty of jump scares and hair-raising tension built upon a solid and engrossing in-house mythology. What more can any horror fan ask for!

Paranormal Activity: The Ghost Dimension is in cinemas from 22nd October through Paramount.