Bradley Cooper + food. Who could ask for anything more? While our television screens remain saturated with cooking competitions, cinema is slowly getting in on the act, with last year’s Chef and The Hundred-Foot Journey appealing to audiences’ taste buds, with Burnt the latest addition. With a screenplay by The Hundred-Foot Journey’s Steven McKnight, Burnt sees its characters similarly aim for the most coveted prize in fine dining: three Michelin stars.

Having previously hit rock bottom as a result of drug addiction, Adam Jones (Bradley Cooper) seeks to resurrect his career as a chef in London after causing chaos in Paris. He assembles a team consisting of old friends and new up-and-comers, and faces off against his long-time rivals who don’t seem too pleased about his return. Many of his relationships with the supporting players seem to come with a history, but this isn’t delved into very deeply. In fact it’s never quite explained exactly what happened in Paris, with the audience left to fill in the blanks. 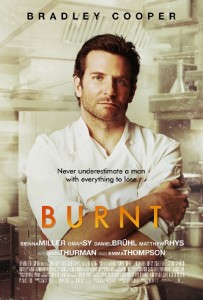 Bradley Cooper appears to channel Gordon Ramsay in the kitchen, hurling expletives at his staff, throwing plates, and just being a dick in general. His performance is somewhat reminiscent of his turn in Silver Linings Playbook, and he throws himself into the role with gusto.  Director John Wells seems to be making a habit out of shouty dramas (his résumé includes August: Osage County and the upcoming US telemovie remake of Animal Kingdom), and he makes it work – tension is high, but there’s a subtle comedic undertone to such characters’ overblown displays of anger.

The supporting cast is full of big names, with Sienna Miller joining forces once again with Bradley Cooper following last year’s American Sniper. It’s been satisfying to see Miller shake off the blonde bimbo typecasting in recent years, and she’s a welcome sight as a leading lady that looks here like a fairly normal person. Of course, studio executive Harvey Weinstein couldn’t take too much of a risk, and he throws the beautiful Alicia Vikander into a few scenes in a role that wasn’t originally in the script because HOTNESS. It’s almost a shame she’s relegated to the beautiful, mysterious woman who doesn’t have a whole lot to do, because she’s one of the best young actresses around. Uma Thurman also shows up briefly as a food critic, and Emma Thompson is her usual glorious self as an analyst that takes Adam’s blood samples (it’s not very clear what the deal is there). Daniel Brühl is a delight as Tony, the restaurant manager in love with Adam, with Matthew Rhys and Omar Sy further contributing strong performances as Adam’s rival Reece, and former/current workmate Michel, respectively. There is limited focus on the other chefs – something about too many spoiling the broth, perhaps?

Burnt has all the trademarks of a mainstream film – a hot cast, big names, romance, and a few too many lucky breaks for its protagonist resulting in a happy ending. It doesn’t break any new ground, though it does feel like a slight departure from the usual tropes, maybe because it doesn’t serve up a simple, contained story. There’s a sense that this is just a snapshot in time of Adam’s life, and while it ends optimistically, it’s not wrapped up too perfectly. What is does have, is Bradley Cooper shirtless and a whole lot of foodporn. And if B-Coop making a decadent birthday cake for a little girl and then eating it with her isn’t the most adorable thing you’ve ever seen, you’re doing the movie-going thing wrong.

Burnt is in cinemas from 22nd October through Roadshow Films.

Written By
Claire Robson
More from Claire Robson
Whether you enjoy the latest Kendrick/Efron vehicle will depend on your propensity...
Read More