At the end of the 1950s, the twin superpowers of the USSR and the USA, both armed with and ready to use a stockpile of thermonuclear weapons, held in their grasp the fate of the human race on this earth. It was in this environment of Mutual Assured Destruction (with the most apt acronym of all time: MAD) that Brooklyn lawyer James B. Donovan (Tom Hanks) was thrust into a maelstrom of international agendas and ideological suspicions when given the job of defending the alleged Soviet Spy Rudolf Adel (Mark Rylance). At the same time, a U-2 spy plane was shot down over the USSR and an American pilot (Austin Stowell) with a head full of high-level state secrets was thrown into a Soviet prison. Bridge of Spies is based on these true events and what happened next, when Donovan traveled to East Germany and negotiated a trade between the players of the Cold War as the world teetered on the edge of Armageddon.

Steven Spielberg’s latest film since 2012’s excellent Lincoln is everything we’ve come to expect from this cinematic maestro: high quality film-making that tackles a serious subject with skill and care, made so well that it becomes easy to share in Spielberg’s very idealised view of the world. The script written by Matt Chairman and none other than the Coen Brothers is excellent, presenting these strange times with a wit and flair which the actors are only too happy to bring to life. This was the 1950s: the age of McCarthy and Sputnik, the middle child of the 20th century caught between the proxy-apocalypse of the Second World War and when the times were a-changing in the sixties. 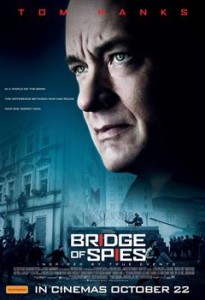 Apart from a fairly unremarkable score by Thomas Newman, every bit of film making on display here is excellent, from the cinematography by long time Spielberg collaborator Janusz Kaminski, to the editing by Michael Kahn, who links certain scenes together with the skill of a master. Also as with Lincoln, the production design is exquisite, recreating the 1950s in all their Mad Men–esque beauty.

Tom Hanks never fails to deliver a good performance and this is no exception, playing Donovan as a moral and well-intentioned man thrust into the most extreme of circumstances. With his collection of well-fitted suits and his all American smiles-and-apple-pie persona he’s becoming more like the modern day Jimmy Stewart with every role. The stand out is Mark Rylance, normally a stage actor who is renowned for his Shakespeare adaptations in the London West End, who will probably get an Oscar nomination for Rudolf Adel, playing him with all the unshakable pride of a Stoic philosopher.

The most surprising and one of the most interesting things about Bridge of Spies is the similarities the setting has with the current world. The frosty relations with Russia are obvious but when read a certain way most of the points Donovan makes about justice and law have a deeper meaning. The main contention of the first half is that everyone is entitled to a fair trial even when a suspicious public and a sensational media get in the way. It also points out that the USA shouldn’t lower itself to the tactics of its ideological enemy when it wants to be known as the self-appointed moral leader of the world – gee, I wonder if there’s any subtext here.

Despite taking a noticeable dip in the middle section and being fairly unsubtle in some places, like when Donovan starts making grandiose statements about the Constitution, Bridge of Spies is quality and worthwhile viewing. Then again it should come as no surprise that a film directed by Steven Spielberg, starring Tom Hanks and written by the Coen Brothers makes for great cinema. Keep an eye out for it during Oscar season.

Bridge of Spies is in cinemas from 22nd October through 20th Century Fox.