Wine and cheese. Alcohol and kebabs. Meat pies and tomato sauce. Guillermo Del Toro and horror. All these things are pretty great individually but fantastic together. Horror veteran Del Toro has directed some of the most well-crafted and intelligent horror films of the last two decades. He can add to his list Crimson Peak. A lavish, gothic, colourful period piece set in early 20th century America and England.

Crimson Peak opens with the pale figure of Mia Wasikowska. A gash to her forehead and crimson blood spots her face and clothes, contrasting intensely with the pure white snow surrounding her. “Ghosts are real”, she proclaims after a suspenseful pause. Who can’t love an introduction like that? Flash back to industrial New York. Mia Wasikowska plays Edith Cushing, a young and head strong hopeful author. She serendipitously crosses paths with dashing Brit Thomas Sharpe (Tom Hiddleston) who is about to try to convince her father Carter (Jim Beaver) to finance his clay extractor invention. Thomas has brought sister Lucille (Jessica Chastain) with him and after being rejected financing he begins a courtship of Edith. Edith’s father notices something awry with the Sharpe siblings and blackmails and bribes them into leaving America. Coincidentally he is soon murdered and Edith, besotted with Thomas leaves the country betrothed, to their grandiose crumbling mansion in England. The situation darkens and she is exposed to supernatural secrets and begins to notice something not quite so right with the siblings. 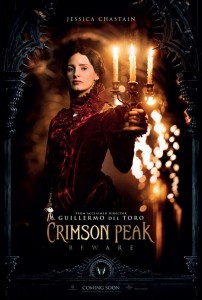 Del Toro has put together a truly stellar cast for this. All the stars deliver outstanding performances. Australia’s own Mia Wasikowska shines as the oblivious damsel in distress. Jessica Chastain sizzles as the exceedingly nonplussed and distant sister-in-law. Yet with all the talent on show Tom Hiddleston still manages to steal almost every scene he is in. He is as dashing as naughties Hugh Grant minus any of the smarminess, while still convincingly conveying the malevolent undertones of his complex character. Del Toro has put together some great binary oppositions as well. We have Mia’s clinging to the past and decision to step into the unknown future. But it’s the classic American/Britain juxtapositions that are always interesting, with the thriving colourful modernistic ingenuity of New York set against the historical and relevant wintery England.

Once the pace of the film picks up and Mia’s character starts to become aware of the sinister vibes of the house and the siblings, the horror begins. Yet the scares aren’t quite to the level of what you would expect with a Del Toro film. There are no jump scares like his marvelously produced Julia’s Eyes. No hair raising moments from The Devil’s Backbone that always creep into your mind’s eye just as you’re about to drift back to sleep. And no creepy situational doors left ajar to let the viewer’s imagination work against them. In fact, the film seems to take itself fairly lightly. Once all the secrets are spilled it picks up into a different gear of nervous laughter and tongue in cheek gore. Perhaps this is to cover up a script with a few holes in it. Once the story unravels there is more than one loose thread but it seems more fun to simply dive in and enjoy the wonderful world Del Toro has created.

It is the world Del Toro has created, along with the powerhouse acting, that is the showcase for this film. A fantastic drab England with clay stained snow, rotting timber mansions, chimneys that whine with wind, iron made elevators, and splashes of red against rust all used to paint a masterpiece gothic setting. The script, which was co-written by Del Toro with Matthew Robbins, is the only let down of this film. There are too many flaws and character motivations that just don’t make sense and some of the writing is a bit too obvious. The ghost metaphor which was supposed to be clever was fairly inane. However, for the most part this is great fun, and coupled with the odd scare here and there is a well-rounded piece of cinema. (Have a look out for Doug Jones easter egg appearance in this one, which is easily missed.)

Crimson Peak is in cinemas from 15th October through Universal.

Written By
Ben Isbel
More from Ben Isbel
Mortal Engines is an initially interesting and engaging futuristic tale with an...
Read More