The Martian is given to us by sci-fi veteran Ridley Scott, and is adapted from Andy Weir’s novel of the same name by screenwriter Drew Goddard. The film certainly feels a lot less fiction and a lot more science then any of his other projects. No doubt this will highly appease all those who love picking apart a movie’s factual errors as happened with Scott’s previous sci-fi film, the more heart-filled and grandiose Prometheus.

Matt Damon delivers a solid performance as Mark Watney – astronaut and botanist extraordinaire.  After a surprise storm on the Martian surface, a NASA crew is forced to leave Mark behind, presumed dead. Waking after the storm has passed to the warning of low oxygen, he manages to make his way to a pressurised short term scientific outpost. From here it is a matter of prioritising survival problems and overcoming them with scientific solutions. Beyond his scientific prowess Mark’s character is not particularly complicated and we learn little of him beyond his roguish sense of humor and wincey one liners. Among the more groan inducing are “In your face Neil Armstrong” and “I’m gonna have to science the sh*t out of this.” 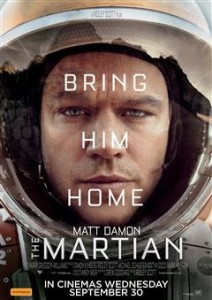 For a movie centred on one man trapped on Mars and by definition the most alone person in history, we learn little about Mark’s fears, desires, or the constitution or philosophies of this man. The most emotional Damon’s character peaks at is telling his captain to inform his parents he loved his work if the worst happens. Nothing appears to tie Mark to the Earth emotionally, yet he fails to form a bond with his new environment. Scott has really missed a great opportunity to showcase a great unknown. Never does the film feel claustrophobic as he’s trapped in one tiny area, and neither does Mars feel vast, barren or daunting. Beyond the weather which tends to reflects Mark’s mood the setting and character are only shallowly explored. So what is on show?

Besides the novel and interesting scientific solutions, more than an equal part of the movie showcases the struggle NASA faces in getting their man home. Kristen Wiig dons an excellent role as uptight public relations and is great with her limited screen time. A revelation is Chiwetel Ejiofor as Vincent Kapoor, the level headed charismatic scientist who heads up the mission of getting Mark home. Donald Glover also appears for a short time as a cocky, brilliant astrophysicist.

Scott fails to break any new ground in the genre and plays everything as risk free as possible in terms of film making and decisions. This is a stock standard Hollywood tension format. After the amazing whirlwind action sequence that opens the film we have tension that ebbs and flows at all the right points and climaxes when it needs to. It feels like Scott has coasted through on this one. Even with the incredibly high stakes and opportunity for so much to go wrong it never feels like Mark isn’t going to ‘make it’. Even though there isn’t too much wrong with this film, it certainly doesn’t feel like there is anything spectacular to be missed with The Martian. The character and the environment are certainly underutilised. This is one to see for the lovers of science itself.

The Martian is in cinemas from 1st October through 20th Century Fox.