Adaptations of William Shakespeare‘s plays are often reduced to the colourful melodramatics that The Bard’s writing exudes. A familiar stage setting brings the wordplay and character dynamics to the fore, but atmosphere is more difficult to capture, and the Scottish Play in particular needs the feeling of the blood-smeared, brooding Scottish highlands. It needs the atmosphere, the lonely mountain-top gales, the haunting valley mists, the oppressive, lingering damp: all the magnificence of which creates the bedrock for ambition, madness and grief. The ambition of Justin Kurzel to bring Macbeth back to his bloody roots is evident from the opening moments of Macbeth, a boldly cinematic take on an oft-recited tale.

In Kurzel’s follow-up to 2011’s Snowtown, there are no clean jerkins, cod-pieces or wart-nosed crones gathering around glowing cauldrons (although there is a cauldron). The costumes are tattered and blood-stained, designed to ward off the cold as readily as the sword blows. The armies are wild and unsparing in gore, the weather unremittingly bleak. The accents are deep, growled, almost indecipherable at times. For those who know the play well, this last aspect is hardly a problem. Michael Fassbender and Marion Cotillard are two of the most impressive actors in cinema today. The former plays the prophesised King of Scotland led to murder, insanity, betrayal and madness, and Cotillard embodies the woman who encouraged him and was driven mad herself with guilt at the monster she solicited. Their coupling as King and Lady Macbeth is never less than engaging. 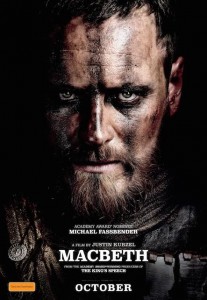 Elsewhere in impressive performances, Paddy Considine is loyal and understated as Banquo, and a special mention must go to Sean Harris, who owns his performance as the betrayed and vengeful Macduff.

Scotland is the real star here though. Cinematographer Adam Arkapaw‘s capturing of the Scottish Highlands feeds substantially into our understanding of Macbeth’s psyche, and this combines well with a deep, resounding score from the director’s brother Jed. Macbeth and his wife’s want for power is not only mere personal ambition – it is a result of realistic and opportunistic ease; of the hallucinatory influences of paranoia and isolation; of an intense bitterness towards the landscape and the inefficacy of their subsistent lifestyle on the valley floor, hardly fitting for the Thane of Cawdor. It is a world lived by the sword, and you need not understand the thick Scottish vernacular in this impressive adaptation to deduce all of it.

It is testament to Shakespeare that his writing still packs a punch so many centuries on, and the screenplay from Jacob Koskoff, Michael Lesslie, and Todd Louiso loses none of the immediacy and poignancy, though some of it does get lost in the competing aesthetics of the film. This is top-quality, challenging filmmaking, and with Justin Kurzel next taking on Assassin’s Creed, where he again teams up with Cotillard and Fassbender, Australia has a rising star on its hands.

Macbeth will be cinemas from 1st October through Transmission.

Written By
Angus Tonkin
More from Angus Tonkin
The setting for a film titled Woman at War in any other...
Read More