Joe Wright’s Pan takes on many contemporary social issues. Mining, the exploit of children and slave labour, and the oppression of minority groups are just some of the undercurrent themes of this film. This film has been written by Jason Fuchs to serve as a prequel to J. M. Barrie’s original Peter Pan series. Visually and technically stunning, there is a relatively bleak worldview to the film.

Pan is set during World War Two; the film opens at the Lambeth Home for Boys where the young Peter (Levi Miller) has been living since he was abandoned by his mother as an infant. Now twelve, Peter is subject to rather brutal treatment from the nuns who run the orphanage. While Peter longs for his mother to return and rescue him, the mother superior makes every effort to break his spirit. Peter is suspicious of her motives, wondering where many of his mates are disappearing to in the night. As London is ravaged by Nazi aerial attacks, the future looks grim.

When Peter is kidnapped, bundled from his bed and into the night sky, he discovers a new world. Taken by acrobatic pirates onto a flying ship, he is spirited away into Neverland. When he arrives at his new destination along with his fellow prisoners, he is forced into slave labour. Blackbeard (Hugh Jackman) makes a grand entrance, as the slaves and pirates sing his anthem. He is clearly a masterful dictator, with the population enthralled by him. Deep in the mine, Peter must dig for a pixie dust coveted by the evil Blackbeard who is ingesting it in order to live forever. His companion in the mine, a chap named Hook (Garrett Hedlund), eventually helps him escape into the jungle to search for his mother. 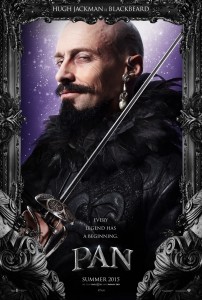 Meeting the tribal landowners, Peter and Hook discover there is a more serious proposition at stake. Blackbeard intends to destroy the island through mining, warring with the locals and killing them all. Tribal princess Tiger Lily (Rooney Mara) tells Peter the truth about his mother and his destiny: he is the chosen one, and only he can save them all.

There is a sense that Pan is a film of the current mood; it is global, multicultural (although still mostly white leads) and addressing the ‘big’ issues of the environment and climate change. The film positions women as heroes, and takes bits and pieces of cultures and stories from around the world to create a hybrid, globalised realm. But the hybrid is a little too pastiche.

In terms of narrative, there is a great deal left unexplained and plenty of confusion. The back and forth with Peter’s mum’s story (Is she dead or alive? If she’s dead, who killed her? If not, where is she?) gets a little tiresome, and given this film will have a huge audience of children, it might be too convoluted. There is no real explanation for Blackbeard’s reign of tyranny, and this might also be lost on the kids.

Despite all this, the film is very enjoyable.  There are great performances for the most part; Hugh Jackman is always professional and the young Australian Levi Miller as Peter is very impressive. Pan is visually very beautiful and totally engrossing. It’s certainly a good way to spend an afternoon during school holidays; you can even take some kids. Seeing it in 3D is worthwhile if that appeals.

Pan is in cinemas from 24th September through Roadshow Films.

Written By
Amy Taylor
More from Amy Taylor
A Month of Sundays is a film about family, the aging process...
Read More