London Road can make the claim that it’s unlike any musical you’ve ever seen before. For starters it’s the first film produced by Britain’s National Theatre Company and it’s undoubtedly as the first ever ‘interview verbatim musical’. Based on the theatre production of the same name, London Road is about a series of murders that happened in Suffolk in 2006. Between October and December of that year the bodies of five prostitutes were found murdered, and at the end of 2006 Steve Wright, a resident of London Road near Ipswich, was arrested and later charged as a serial killer. But this isn’t the subject of the documentary itself; in a very imaginative take on this horrific piece of recent history the musical was constructed by interviewing the residents of London Road. Their responses, with every “Um” and “Ah” still intact, are the lyrics to the songs. It’s an idea that could have gone horribly wrong, but turns into a film which is both fascinating and wholly original.

If there was ever a film that exemplified the idea of ‘Art from Adversity’ this is it. The best thing that can be said about London Road is that it’s nothing if not ambitious, and director Rufus Norris (who previously made the underrated Broken from 2012) plays around with some very interesting ideas and real life characters. The best way to describe it is like a gritty social realist British TV show got injected with the DNA of Les Misérables. Alternatively, it’s almost like a long and complicated version of the ‘Substitute’ game from Spicks and Specks. 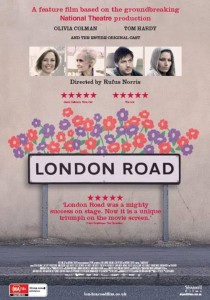 The residents of the real London Road make up the character list and they’re brought to life by an impressive array of actors that includes the always amazing Olivia Colman and none other than Tom Hardy, who shows up for only one scene as a singing taxi driver – a feat that would make any film worth seeing. One of the most fascinating things to come out of the film is what some of the residents said about what happened. All of them were of course shocked by what occurred in their quiet little English town, but some of the lyrics show a take on events where they hated the murders yet also appreciated the streets being cleaned of prostitutes. This taps into the blackly comic vein that is another feature. For example, there’s a song about semen. No really.

Alongside the music and lyrics there’s a beautifully drab look to the film, which seems to reflect the mood of the characters. The sun doesn’t come out for the first three quarters of the film, and then arrives in the final scenes where the residents of London Road all come together for a garden show, having rebuilt their lives and livened up their little street after such horrible events. It always seems like it’s difficult to adapt stage musicals to the screen, but when it happens it’s great to see a transition where cinema is able to add another layer to the show. This is something that London Road does very well; it doesn’t throw off its theatrical origin but rather wears it with pride.

Whether it works will depend on the viewer, but it’s such an original concept that it’s worth checking out, especially if you’re interested in musicals. Rufus Norris has made a film that has some very mature and rather beautiful things to say about how people react to tragedy, and it’s presented in a way which you’ve never seen before, something which should be celebrated endlessly with the current state of motion pictures. It won’t work for everyone, but London Road isn’t a film to be overlooked.

London Road is in cinemas from 24th September through Sharmill Films.