Set in the sleepy Victorian coastal town of Warrnambool, Oddball is based on the true story of a white maremma dog set with the task of protecting fairy penguins on a small island. Oddball is a boisterous pet, who is causing havoc everywhere he sets foot. He has drawn the unwanted attention of local authorities, who want to see Oddball out of trouble, and out of action.

Oddball’s owner is Swampy (Shane Jacobson), a local chicken farmer and grandfather to Olivia (Coco Jack Gilles). Together Swampy and Olivia are very fond of Oddball, and don’t want to see him locked up (or worse). But there are other issues at play. Olivia’s mum Emily (Sarah Snook) is the guardian of the penguin sanctuary, and numbers are dropping as foxes raid the small island at low tide. If the numbers drop too low, the sanctuary will be closed, making way for the new tourist attraction. Emily’s new boyfriend, visiting American bureaucrat Bradley (Alan Tudyk), is torn; does he save the island for the penguins and Emily, or save his job. 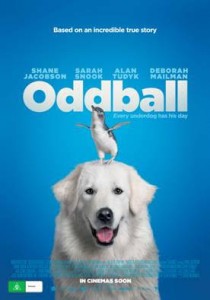 By chance, Swampy discovers that the unruly Oddball has an affection for the precious fairy penguins. Swampy and Olivia hatch a plan to have Oddball planted on the island overnight, protecting the penguins from the foxes and saving the sanctuary from closure. It’s a gamble, but Swampy and Olivia agree; ‘if you want the biscuit, you gotta risk it’.

Oddball is a genuinely sweet and funny film. Director Stuart McDonald has a background working with Chris Lilley’s various series, so he clearly has a sense of good comic timing. Oddball is perhaps better suited to a younger audience, as the tendency for ‘hammy’ acting styles is common in children’s drama. The film has some really great Australian actors – ones we all know and love. Unfortunately some of them are not in the film for long enough – Frank Woodley plays the traditional villain, the town dogcatcher. Deborah Mailman is the town mayor. Other well known faces make short cameos. It is a shame that such great talents are barely utilised, in roles that offer just a few minutes of screen time.

As always, it is great to see real Australian stories – and landscapes – make it to the big screen. While this film might not be quite in the same league as Babe or Red Dog (it is not quite as polished and professional), it is still a very easy watch. If you need to get out of the house – with or without kids – during the school holidays, you should be pretty chuffed if you land in front of Oddball. Providing you like animals, that is.

Oddball is in cinemas from 17th September through Roadshow.

Written By
Amy Taylor
More from Amy Taylor
The silence in the title of Martin Scorsese’s most recent film refers...
Read More