Thanks to Madman Films, we’re giving away 5 doubles passes to the new film starring Jermaine Clement PEOPLE, PLACES, THINGS, in cinemas from September 10. 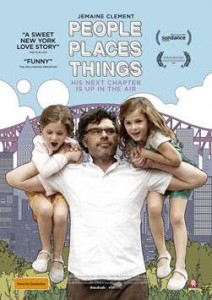 Film Synopsis: Will (Jemaine Clement) is a graphic novelist, a professor at the School of Visual Arts and the father of beautiful twin girls. His seemingly picture-perfect Brooklyn life is turned upside down when he walks in on the mother of his children and long-time girlfriend, Charlie, with another man at their daughters’ over the top fifth birthday party.

Flash forward one year later, Will is a single father, living alone, trying to put his life back together with the help of his student Kat (Jessica Williams) and her mother (Regina Hall). In this thoughtful comedy, Will is forced to navigate the unknown landscape of single fatherhood and dating in New York City, while coming to terms with himself both as a father as an artist.


How to enter:
1/ Subscribe to our newsletter at http://eepurl.com/40DaX
2/ Send your name and mailing address to giveaways@filmblerg.com

Terms and Conditions
1/ Prizes are eligible only to Australian residents.
2/ Film Blerg and xx cannot be held accountable for any delay or loss in prizes.
3/ You must subscribe to the Film Blerg newsletter to be eligible.
4/ Any information sent remains confidential.