There is a bitter-sweet quality to director Anton Corbijn’s film Life, in that we already know the fate of one of the lead characters, Jimmy (Dane DeHaan). Jimmy is James Dean, the subject of the film and the chosen subject of photographer Dennis Stock (Robert Pattinson), the film’s second leading character.

It is the early days of Jimmy’s career, Los Angeles in 1955. Jimmy has made East of Eden (1955) which has drawn a small amount of attention, and director Nicholas Ray is considering him for the lead role in Rebel Without A Cause (1955). It is the early days of Dennis’ career too; he is sick of shooting red carpets and film stills, and looking for his big break. When the two young men meet by chance at the casting party for Rebel, Dennis realises Jimmy may just be the big break he is looking for. 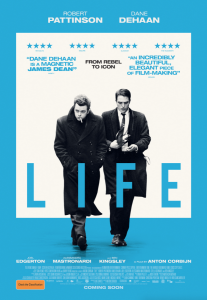 Dennis has an agent in New York, John Morris (Joel Edgerton), who is not convinced. He’s never heard of James Dean and can’t see this unknown kid from Indiana making it big. He assures Dennis his opportunity will come – and with it a proper gallery exhibit – if only he will be patient and keep in paid work. Dennis doesn’t agree, and when Jimmy absconds from Jack Warner (Ben Kingsley) and the studio pressure in Los Angeles, Dennis follows. Once in New York, Dennis gradually earns some trust from the elusive Jimmy, and finds himself invited to the farm in Indiana to meet his family. Dennis photographs Jimmy in New York and at the farm, as the two gradually become friends.

Life has a tremendous photographic quality – as it should; it is about photography. Not all directors are able to generate this quality in their films, but Corbijn has. Lots of grey filtering gives the film a gritty and tonal quality, especially after Jimmy and Dennis go to New York and then to Indiana. The film is visually very beautiful, with gorgeous cinematography which is suggestive of Corbijn’s work as a photographer himself.

Corbijn extracts great performances from DeHaan and Pattinson. The development of the friendship between the two characters is almost like a courtship. Despite his frustrations, Dennis continues to see something in Jimmy – something the world eventually sees. Dennis and Jimmy have very different backgrounds; Jimmy’s family have a sense of dignity and peacefulness whereas Dennis is disconnected from his young son and ex-wife.

In the iconography of James Dean – the enigma and the legend – it is easy to forget there was a human being. A man with a family, a home and a past. Additionally, it is easy to forget that another man was responsible, in part, for the iconography of Dean, and that man was Dennis Stock. This film is fascinating in its subject matter, but equally so in the exquisite way the Corbijn has realised the subjects visually.

Life is in cinemas from 10th September through Transmission.

Written By
Amy Taylor
More from Amy Taylor
Directed by James Marsh, The Mercy is the story of Donald Crowhurst...
Read More