Because it came out in the same year, the comparisons with Fifty Shades of Grey are inevitable but it wouldn’t be possible for the two films to be more different. With a heady style in homage to 1970s/80s European cinema, it might be described as ‘Fifty Shades for the art-house community’ or to be less generous: like Fifty Shades has been injected with a mix of extra strength hallucinogens.  There’s a surreal quality that defies normal viewing habits, and on first watch it’s a thoroughly overwhelming experience to try to understand. There are no men in the film, and apart from the occasional extra, D’Anna and Knudsen are the only company for the entire running time. 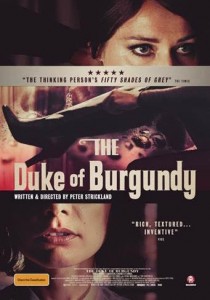 There have been some really beautiful looking films this year but The Duke of Burgundy would have to be the runaway best. It isn’t often we get to see production design and cinematography that has been so beautifully honed, but when it happens it’s a treat. The house that it all takes place in is a work of art; designer Pater Sparrow deserves every award that he hopefully gets nominated for, and the same goes for Nic Knowland for the photography.

During its best moment, Strickland plays around with this relationship in a really clever and fascinating way, twisting the idea of where the power lies and who is in control. Even with the subject matter all the most explicit scenes happen, quite literally, behind closed doors and leave you to fill in what’s going on in your own mind. This will be an exceptional film for many but whether you enjoy it will depend on what kind of film fan you are. Members of the art house community will love the surreal visuals and the layers upon layers of subtext, but this is also the aspect that will probably put many off. There has to be some kind of huge overarching tonal message laying underneath, but you might need to be in an altered state of consciousness or have a PhD in moth biology to figure it out.

The real tragedy is that the worst possible thing happens – a film about the power-play in a lesbian sadomasochist relationship actually becomes dull, which shouldn’t be possible. Even with the stunning images it can’t help becoming tedious with repetition and it ends up feeling much longer than the ninety minute running time. If you’re willing to take the plunge and brave the strange, haunting world that Stickland creates, go for your life. For everyone else this might be a bit too strange and esoteric to satisfy.

PS – The Duke of Burgundy has to contain the greatest credit of the decade: “Human toilet consultant”.

The Duke of Burgundy opens 10th September through Madman.

Written By
Simon Storey
More from Simon Storey
In the foothills of the Pyrenees, rebels have invaded the vineyards. Row...
Read More