In the late 80s, five young men from Compton, LA, released an album that revolutionized a musical genre and brought many social battles thriving across the country to the forefront of the minds of Americans. Calling themselves Niggaz With Attitude (N.W.A), Andre ‘Dr.Dre’ Young (Corey Hawkins), O’Shea ‘Ice Cube’ Jackson (O’Shea Jackson Jr.), Eric ‘ Eazy-E’ Wright (Jason Mitchell), Lorenzo ‘MC Ren’ Patterson (Aldis Hodge), and Antoine ‘DJ Yella’ Carraby (Neil Brown Jr.), made up this seminal gangsta rap group. The album, Straight Outta Compton, not only carried a very literal meaning but more importantly expressed the opinions and life experience of growing up in Compton, with a particular focus on racism and police harassment.

Directed by F. Gary Grey (Friday), Straight Outta Compton’s strengths come from being able to interweave the stories of Cube, Dre, Eazy, Ren and Yella. Each member gets their due credit both during and after N.W.A, following the successful solo careers of Dr.Dre, Ice Cube and the less successful Eazy-E. Undoubtedly a difficult achievement, considering the amount of time spanning from pre to post N.W.A, it manages to include the fights, feuds and reconciliation between the five. 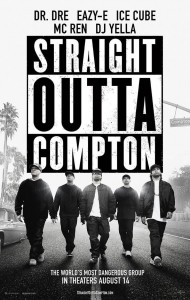 Performances behind each of these characters are all as tight-knit as the group in their heyday. The masterstroke of the film comes from Ice Cube’s son O’Shea Jackson Jr. who plays his father. Jackson Jr. is indistinguishable from Jackson Sr. and encapsulates his mannerisms with the type of accuracy that comes from being raised by the man himself.

The film’s tender moments don’t quite carry the same guarantee, but instead come off as fleeting and ham-fisted, even when it includes the death of one of the group members. At times the film’s materialistic concerns, although assuredly accurate, lose some of their appeal when they stop becoming a backdrop and start turning the film into a substandard music video. This is possibly an odd argument considering the lives of successful rap and hip-hop artists, but some scenes become nonetheless tiresome after the third slow-mo, cash dropping, gyrating, mansion party.

Rewardingly, Straight Outta Compton does do justice to the iconic tracks released by N.W.A and the solo material from its members after the group’s end. Demonstrating the construction of the beats and lyrics at times seems a little too convenient or coincidental, but more often than not the songs come out on top. The film celebrates good music the way it should be; the live concerts are not only well captured but also seem to be just as exciting and enjoyable as being there at the time. Particularly during N.W.A’s ’89 Detroit concert when the group were told they would be arrested if they performed the infamous F*** tha Police (a track that in 1990 was banned from being played on Triple J. In protest, the station instead played N.W.A’s ‘Express Yourself’ on air for 24 hours straight). In hindsight, it would seem the Detroit police department did everything in their power to elicit the unintended reaction they received.

The difference between Straight Outta Compton and films like Friday or the classic Boyz n the Hood is in their longevity, with the latter being as relevant today as it was 24 years ago. They shine a glaring light on social problems in inner-city Los Angeles and greater America. It’s important to remember that these two films wouldn’t exist without the music of N.W.A and not just because they both contain contributions from Ice Cube but also because of their potency. These films followed the same stride as the music that inspired them. This film seems to lag in comparison, avoiding raw honesty for something a little more contained. Straight Outta Compton is an enjoyable film and for fans there’s much fun to be had, but it is not quite the inspiration it could be.

Straight Outta Compton is in cinemas from 3rd September through Universal.

Written By
Edward Curtis
More from Edward Curtis
Posing as a photographer, a lone horseman rides into a remote village...
Read More