It’s been a volatile month for the issue of marriage equality in Australia. It opened with a full page ad that ran in The Australian comparing gay marriage to the Stolen Generation of all things, then there was the six hour government meeting which resulted in the referendum fiasco, and now the documentary Gayby Baby by director Maya Newell is in the headlines. The story goes that it was set to be screened in high schools across the country as part of the ‘Wear it Purple’ Campaign. This then resulted in a political shit-storm where is has been banned from screening at state schools across NSW, and started a public feud that includes Victorian MP Daniel Andrews, The Liberal NSW government, Sydney’s Daily Telegraph, Burwood Girls High School, and now the Australian Christian Lobby has got involved. It’s all rather confusing and infuriating.

Whatever your views on the topic of marriage equality, Gayby Baby is worth seeing for the simple fact that it’s a really good documentary which has some lovely things to say about family, love and the changing current of Australian society. The topic is explored through the eyes of four children who have grown up with same-sex parents, voices which seem to have been left out of the public debate and yet are more educated than anyone else to discuss the issue. 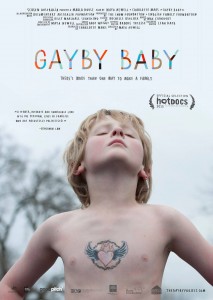 There’s ten year old Gus, a fanatic fan of WWE wrestling living with his little sister and two mothers. Ebony (12) wants more than anything else in the world to get into a Performing Arts High School to become a singer. Graham (11) has trouble reading and has just moved with his two fathers to Fiji, a country where homosexuality still isn’t that comfortable a subject and where he has to try and catch up to the literacy levels of everyone else at his new school. Finally there’s 11 year old Matt, who is dealing with an existential crisis and is in the confusing situation of having two mothers, one of whom is a devout Christian and where the local pastor has raised concerns that she is committing a sin against God.

All four stories are diverse; each child goes through different struggles and deals with them in different ways. But the thematic link between them all is a simple one – all the children are happy; they are growing up with loving and supporting families, and growing into fine young adults. Importantly Newell trusts the audience to be intelligent enough to know what she’s trying to say and doesn’t throw it at you in an unsubtle or condescending way.

Best of all, the documentary isn’t dour or heavy handed. There are moments of poignancy such as when Ebony auditions to get into a Performing Arts high school, and some scenes are laugh-out-loud funny like when Gus has a debate over the merits of wrestling with one of his mums who can’t stand the sport. The only thing that seems to be lacking is that some of the issues raised aren’t deeply explored – for example, Matt’s mum’s devotion to God is brought up and then almost left hanging. But then again, that’s a can of worms usually best left unopened around this debate.

You really must hand it to Maya Newell; she hasn’t chosen an easy task to set herself. Her film explores – among other things – religion, sex, and politics, but it has ended up beautifully. This isn’t a documentary which yells a message at you; the simple fact it reminds you of is that family is family, every parent loves their child, and same-sex families are just as lovably dysfunctional as every family that has ever been or will ever be. It seems an obvious message, but with some of the ridiculous arguments that are thrown around the marriage equality debate, it’s a memo that some people really need to hear. Judging by the reaction it’s received, it’s fairly clear that most of the people who are opposing showing this in schools simply haven’t seen it.

Written By
Simon Storey
More from Simon Storey
In November 2008 ten members of a terrorist sect operating out of...
Read More