Winner of this year’s Sundance Grand Jury Prize and Audience Award, Me and Earl and the Dying Girl promised to be a tearjerker, and a quirky one at that. A teen drama about cancer often equals big bucks and fan girls. But that’s assuming the lead guy is hot and there’s some super lame dialogue about how much he loooooooooves the main gal. Teenagers aren’t interested in this friendship rubbish! THEY WANT PASHING. In Anne Frank’s house! While someone starts a slow clap. (That’s unfortunately not a joke but a hella lame scene from The Fault in Our Stars).

Greg (Thomas Mann) flits around high school without committing to any of the established cliques. He hangs out with his one friend, Earl (RJ Cyler) but prefers to refer to him as his “co-worker”.  Together they create parodies of their favourite movies and hang out in their super cool teacher’s office every lunch time because that’s not weird at all. When Greg’s childhood friend and schoolmate, Rachel (Olivia Cooke) is diagnosed with leukaemia, he is forced by his parents (Connie Britton and Nick Offerman) to befriend her. He tells her as much, she’s not exactly impressed, but they become friends anyway. And just to make things clear, Greg’s voiceover constantly reminds us that this isn’t a touching romantic story (read: “no, we’re totally not piggy-backing off the success of The Fault in Our Stars”).

The best thing about this film is its quirky nature. Director Alfonso Gomez-Rejon’s résumé mostly consists of television work, and visually there are some similarities between this film and Glee, of which he directed eight episodes. The editing makes for some fun visuals, while puppet scenes that play inside of Greg’s head along with his dry narration afford the film a certain charm. Snippets of Greg and Earl’s films make for the most entertaining moments, and a talking poster on Rachel’s wall featuring a cameo performance is well-appreciated. 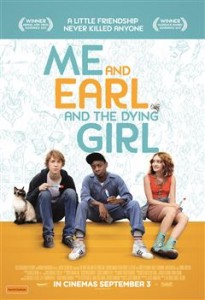 In a way this film should just be called ‘Me’ because Earl and Rachel are most definitely secondary to Greg’s experiences. The film is all about him, and while there is a focus on both friendships, we are faced with a very self-centred protagonist. And who can really blame him – he is a teenager after all. Whether this aspect bothers you may determine how much you enjoy this film. Those viewers who have lost friends to cancer may identify with his experiences, while some may view him with disdain. Others will sit on the fence – willing to go along with his story, but not overly touched by it.

Contrary to expectations, I did not shed a single tear throughout the film. Not even close. Whether that was because the focus was on him and not her, or because Thomas Mann is rather vanilla, or that there was no love story, is hard to say. In many ways it was refreshing to see a film that focused on the platonic friendship between a girl and boy, without going the overly lame sap-crap road that has already been trodden in The Fault in Our Stars and countless other teen romances. Supposedly one of the big take home points of Jesse Andrews’ novel (and to a lesser degree the film) is that Greg never really knew Rachel that well at all. This means the viewer can’t know her either, and it makes it hard to feel too deeply for either of them.

It’s a shame that we don’t get to know Rachel that well, because Olivia Cooke is rather mesmerising. So much so that you just assume that it will ultimately turn into a love story, even when we’re constantly reminded that it won’t. For someone who’s dying, Rachel is unrealistically stunning. Her “I can’t stand the way people look at me, I’m so ugly, etc.” patch of dialogue would have been much more affecting if she didn’t just look like a model who had shaved her head. The make-up team underperformed in this regard as she did not look anything like a cancer patient, baldness aside.

Earl similarly is relegated to the sidelines – his is a one-dimensional role that some commentators have gone so far as to call a racist stereotype. Others argue that as the film is from Greg’s perspective, his portrayal of his best friend is merely uninformed due to his own insular, privileged lifestyle. This still seems problematic. The adult characters, while also under-developed, are more fun – Nick Offerman is a wonderfully bohemian father, Jon Bernthal is the super cool high school teacher (because he has tatts and eats pho), and Molly Shannon is a mix of tragic and comedic as Rachel’s flirtatious and alcoholic mother.

If you’re a sucker for a quirky coming-of-age Sundance hit, along with its cutesy soundtrack and obvious attempts to be cool, you may consider Me and Earl and the Dying Girl to be a triumph. However, for others, the emphasis on platonic relationships ahead of romantic ones will not be enough to make this a teen drama that stands out above the rest.

Me and Earl and the Dying Girl is in cinemas from 3rd September through 20th Century Fox.

Written By
Claire Robson
More from Claire Robson
If you want to know why the arts are imperative in education,...
Read More