One of the most interesting thing about The Wolfpack is the story behind how it came to be made. One evening director Crystal Moselle was walking down a street in lower Manhattan when she came across six siblings. They each had hair down to their waists, and with black sunglasses and cheap suits they looked uncannily like the Reservoir Dogs. She began a conversation, soon became friends with them, and happened across their fascinating story.

The boys were the Angulo family, six brothers with Sanskrit names like Narayana, Bhagavan and Jagadisa, who grew up in the Lower East Side of Manhattan, but with a twist. For over fourteen years the boys had been locked away in their four bedroom apartment due to their father’s rule; he had the only key to the front door and banned the children and their mother from leaving the house. In that time they had been home-schooled (their only source of income since their mother was a registered teacher) and, here’s the fascinating thing, watched films.  The only connections that these boys had to the outside world were the films that they watched, with a passion so intense they have scripts for entire films memorized. They would record themselves acting out scenes from their favorites (to name a few these include: Pulp Fiction, The Dark Knight and Reservoir Dogs) with amazingly detailed props and costumes they had made from things around the house. 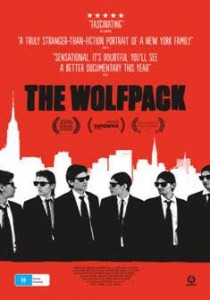 As a documentary The Wolfpack sets out to explore two things – this fascinating group of brothers and behind that, an exploration/testament to a love for the cinema. If it wasn’t for a style of parenting that approaches that of Josef Fritzl, how these boys grew up would be a fascinating social experiment. The only knowledge they had of how the world outside their apartment worked was learned by watching lots and lots of movies, which presumably would lead to a rather warped world view. Yet they seem like very polite, well-adjusted, and normal boys for their age which comes as a bit of a surprise.

One aspect which is handled in a very level-headed way is the exploration of Oscar, the father. He’s a figure that could easily have been depicted simply as a tyrannical maniac, but to Moselle’s credit she allows him to give his side of the story. The answer is that he didn’t want his boys contaminated by the scourge of the modern world with its drugs, religion, and phony philosophy; all he ever aimed to do was protect them. But this isn’t to say he gets off lightly; most of the boys reveal that they despise him and there’s even a subtle implication that he may have been abusive along the way. While we do come to understand where he came from, there’s still the matter that he kept his entire family locked up in a tiny apartment for most of their natural lives which is nutty by anyone’s standards. One of the boys reveals at one point that they had no idea what the word ‘Google’ meant until he decided to sneak out.

If there is a problem with the documentary it’s that once the topic had been explained there really isn’t much else to explore and even with that, there are many questions that haven’t been answered by the end. It also noticeably sags in places which is a bit of problem for a ninety minute running time. But these are small flaws in what is overall a very interesting film. Now that the brothers of the Angulo family have been exposed to the world and Crystal Moselle has an accomplished film under her belt only one question remains – what does the future have in store for both their careers from this point on? Who knows, but it will be fascinating to see.

The Wolfpack is in cinemas from 27th August through Madman.

Written By
Simon Storey
More from Simon Storey
Ten years and eighteen films have built towards Infinity War. This has...
Read More