Feel like seeing a Woody Allen film but don’t want to support the likes of Woody Allen? Well there’s a solution! Peter Bogdanovich’s She’s Funny That Way has all the hallmarks of an Allen film – a screwball comedy set in New York, it has a quirky score, some over the top accents, and Owen Wilson as the adulterous protagonist who we’re meant to root for because cheating’s no biggie, right? Bogdanovich’s first feature film since The Cat’s Meow (2001), She’s Funny That Way is a blast to the past; its old-fashioned nature is almost a novelty, because as the old folks say, “they just don’t make ‘em like they used to”.

Arnold Albertson (Owen Wilson) is set to direct a new Broadway play, starring his wife and actress, Delta Simmons (Kathryn Hahn) and aging playboy, Seth Gilbert (Rhys Ifans). To his horror, Izzy (Imogen Poots), the call girl with whom Arnold shared a tryst the previous night, shows up to audition, and her talent is undeniable. The playwright, Joshua Fleet (Will Forte) is smitten, even though he’s already in a relationship with Izzy’s high-strung therapist, Jane Claremont (Jennifer Aniston). The elderly Judge Pendergast (Austin Pendleton) is a client of both Jane’s and Izzy’s, and obsessed with the call girl, enlists private investigator, Harold Fleet (George Morfogen), who is Joshua’s father, to tail her. In short: they’re all connected; hilarity ensues! 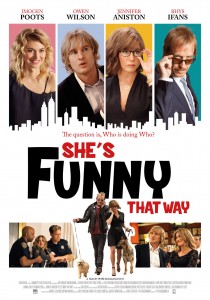 The film moves along at a rapid pace, with coincidences, adultery, and general screwiness delivered in spades. Almost every character grows more and more neurotic, and there’s lots of yelling and running around and hookers hiding in hotel bathrooms. The cast is full of talent, with the majorly underrated Kathryn Hahn the highlight. Imogen Poots dazzles as Izzy, but her faux Brooklyn accent isn’t too convincing. Jennifer Aniston fans are sure to love her hilarious turn as the unethical and unfriendly therapist – after this and Horrible Bosses it’s clear she can nail any part that calls for full-on bitch. The male players are left somewhat in the dust – Owen Wilson does his usual Owen Wilsony thing so if you’re into that, enjoy. There’s also a few cameos peppered throughout for good measure, adding to the overall sense of the film’s *wink, wink, nudge, nudge* nature.

Like Woody Allen’s recent films (with the exception of the superb Midnight in Paris), She’s Funny That Way is a fun enough way to pass the time, without being particularly memorable. It’s nothing new, but if you feel like basking in some old screwball nostalgia you’ll surely get a few laughs out of it.

She’s Funny That Way is in cinemas from 27th August through Disney.