The Guest, directed by Adam Wingard and written by Simon Barrett, is a hilariously bonkers ride. It starts off innocently enough: a man arrives unannounced to give his condolences to a family grieving the death of a son he served with. Soon, however, the film takes on a darkly comic and exceedingly violent turn, against the retro backdrop of an 80s inspired, synth-infused soundtrack and preparations for a high school Halloween-themed social. It’s crazy, it’s silly, but it’s also thrillingly fun, and, importantly, the film never veers off into unhinged chaos. Instead, it practices a form of controlled violent indulgence, and a large part of this must be attributed to the screenplay and the mesmerizing, charismatic and efficient lead performance.

The film wastes no time in introducing us to David Collins (Dan Stevens) as he arrives in a small rural town and at the door step of the Petersons. In seemingly no time, he ingratiates himself to the family with his unassuming and down-to-earth charm: he becomes the go-to drinking buddy of the family’s patriarch (Leland Orser), and beats up the bullies of youngest son Luke (Brendan Meyer). However, after the shocking death of one of her friends, daughter Anna (Maika Monroe) becomes suspicious and disillusioned with David’s mysterious unexpected presence, and begins to dig deeper into his past and identity. From here on out, the film becomes an all-out blood-splattered romp. 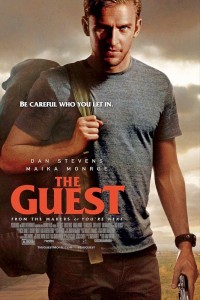 The film’s greatest strength is the way it sustains its mood of comical sincerity throughout. The screenplay is fantastic, perpetuating a thin veneer of seriousness that makes little attempt to hide its blatant, ironic humour. The performances, too, are terrific, with Meyer and Orser repeatedly delivering lines with superb comic instincts and Monroe imbuing what could have been a stock ‘petulant teenager’ role with maturity and depth.

However, Stevens is without a doubt responsible for establishing and setting the mood of the film. His performance is hypnotic. Self-assured, soft-spoken but always self-aware, Stevens delivers his lines as if winking to the audience with a completely straight face. Over the course of a simple conversation, he manages to be simultaneously sincere and sarcastic, polite and menacing, serious and self-effacing, and he navigates the film’s bipolar tone with hysterical poise and control. His performance is complemented well by the heady, pulsating electronica soundtrack, which lends the film a darkly nostalgic atmosphere. Overall, The Guest is an immensely entertaining, surprising and thoroughly welcome shot of hilarious adrenalin.

The Guest screened at the 2015 Melbourne International Film Festival.