It’s sadly all too common for women in Western society to experience body image concerns. In a culture where thin is in, and beauty is everything, girls are taught to hate their bodies from early on, with severe cases resulting in the onset of eating disorders. Writer and director Sanna Lenken suffered from anorexia nervosa during her adolescence, and witnessed the effect this had on her parents and younger sister. Feeling that this aspect was sorely lacking in fictional onscreen accounts of the disorder, she wrote My Skinny Sister, a fictional portrayal told from the perspective of the younger sister of a teenage girl suffering from anorexia.

Stella (Rebecka Josephson) is the twelve-year-old, chubbier sister of the beautiful Katja (Amy Deasismont), a seventeen-year-old fixated on her dream of becoming a professional ice-skater. Stella idolises her older sister, while harbouring jealousy due to Katja’s beauty, talent, and interactions with Stella’s crush, the thirty-five year old skating instructor, Jacob (Maxim Mehmet). After she catches Katja deliberately making herself sick, Stella is sworn to secrecy, and Katja starts to unravel before her eyes. Eventually their parents (played by Henrik Norlén and Annika Hallin) discover the truth, and together the family embarks on the long road to recovery. 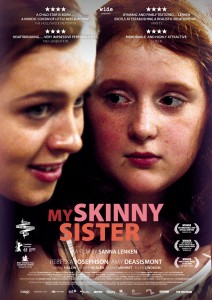 In her feature debut, Lenken beautifully portrays the hardships of overcoming an eating disorder. While the parents’ involvement is often portrayed as the end-point, perpetuating the myth that simply by their knowing the disorder will soon cease to exist, Lenken presents an alternative view. That they too will struggle to cope, that there will be initial refusal to seek treatment, and most specifically, that siblings don’t just continue to get on with their lives in the midst of a crisis that affects the entire family dynamic.

Rebecka Josephson is the type of kid that we see all the time in real life, but rarely on screen. In many ways Stella is your average kid – a bit awkward, a little chubby, she worries, and she also has fun. It’s an absolute delight to watch Josephson on screen – her portrayal of Stella is completely authentic; she never seems to be reciting lines from a script and her facial expressions cut to the core. Amy Deasismont has your more typical movie star looks, and appears in her first acting role following success as a pop star in Sweden. Her performance is similarly captivating; she provides enormous insight into what it’s like to live with an anorexic teenager, and it’s heartbreaking to watch.

My Skinny Sister addresses difficult subject matter, and audiences aren’t likely to leave in high spirits.  But for insight into an important issue affecting many individuals and their families, this is quality filmmaking, and a film that deserves to be seen.

Written By
Claire Robson
More from Claire Robson
Without even seeing this film there is a lot to be surmised...
Read More